Mohd Hafiz Abdul Majid provides tourists and visitors with an experience like no other. 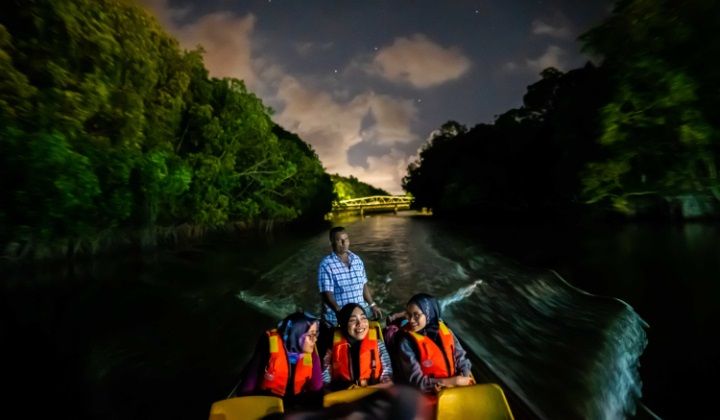 Mohd Hafiz Abdul Majid, a former refugee from Myanmar, possesses the gift of ‘talking’ with fireflies.

Each firefly seeks out Mohd Hafiz as he approaches them along Sungai Cherating river banks in Pahang.

Swinging flashlights, he relays messages and communicates with the fireflies, making them come to him.

It was a skill he learned by chance; Mohd Hafiz never expected himself to have the ability.

At first, he was content to provide visitors with the typical day time river cruise and other related activities.

“At that time, I know nothing about mangrove and its ecosystem.

“All I knew was to bring people to see nature and wild animals” he told TRP in an interview.

He discovered the fireflies after noticing people making boat trips to see them at night and started offering the same services.

One night, as he was alone along the river, the fireflies started moving towards him as he was fidgeting with his torchlight.

Filled with curiosity, it prompted him to improve on his techniques through trial and error.

Besides making the fireflies come to him, he can direct them to go to other nearby boats.

He even took the effort to learn more about fireflies from the Internet.

Unbeknownst to him, he got the facts all wrong as there are different fireflies in the world.

Until one day, he was visited by Dr Nobuyoshi Ohba, a firefly expert from Yokosuka, Japan.

Dr. Nobuyoshi hired him for the boat service, but Mohd Hafiz declined to take the money and instead asked Dr Nobuyoshi to teach him.

“He made me realise that I had to unlearn everything I knew about fireflies.”

As a young man, Mohd Hafiz had left his country to avoid political persecution.

He left Yangon for Malaysia in the years following an uprising in 1988 against Myanmar’s military government.

Mohd Hafiz ended up in Malaysia and worked for more than a decade as a restaurant helper in Cherating.

In 2003, he met an accident that broke his leg and forced him to work as a boat driver.

The rest, as they say, is history.