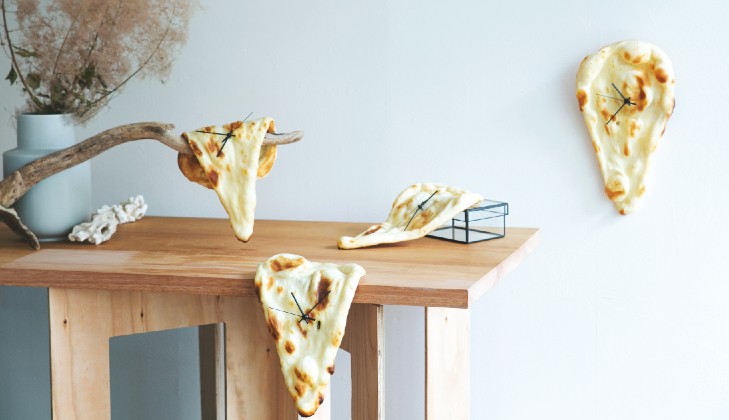 Have you ever looked at the time and thought, “I’m craving for some nice, puffy naan”? Well, you actually just might keep thinking that with a naan clock made from an actual piece of naan.

It’s not naan-sense but an actual product for sale thanks to Yukiko Morita – a quirky Japanese breadmaker-cum-artist who sells her loaf-ly creations on Pampshade.

Why a Naan Clock?

Speaking to TRP, Yukiko revealed that she got the idea from Salvador Dalí’s iconic “The Persistence of Memory” painting.

The melting clocks reminded her of naan and so she decided to express this sense of “loose time” in a melting clock of naan.

Why not slowdown, stop fussing over details, and chill out a little? Our naan time clocks only have hands, so you don’t need to count each minute. We hope you can take it easy just like naan’s loose forms.

It’s all about expressing time in a calm and relaxing way. In fact, she wants time to be so chill that the clock’s name – “NAAAAN time?” – is also “melting”.

Sidenote, even its Japanese name “Ima Nanji” is a naan pun, playing on the Japanese words for “What the time?”.

The naan itself is real baked naan bread, so each piece has a different shape and texture.

Yukiko bakes the naan herself before attaching a clock module to create the naan clock.

If it’s lunchtime and you’re hungry, unfortunately you can’t eat the clock as it has an antiseptic and antifungal coating to prevent it from decaying.

But the naan clock isn’t Yukiko’s first foray into the bread art business.

She’s been making lamps out of actual breads and pastries for years, ranging from delicious glowing baguettes, boules and croissants – which we have to admit look too good to eat!

Yuko previously worked at a bakery in Japan and that’s when her love for bread really began.

I fell in love with bread and I found there are potential besides being just food. I am an artist, so then, I start to make works using real bread.

In a 2018 interview with Vogue, she recalls eating the inside of a loaf next to a sunny window, and noticed the light shining through the bread crust. Yukiko thought “the shape and color of breads are warm” already and slowly the idea of an illuminated bread began forming in her mind.

“Bread lamps express my love of bread, ” she tells TRP.

She wants to continue experimenting with more bread styles for Pampshade, so who knows, we might even see a Roti Canai clock one day? But for now, it’s naan o’ clock!