Tiffins have been the best way to pack a lunch for over 100 years. 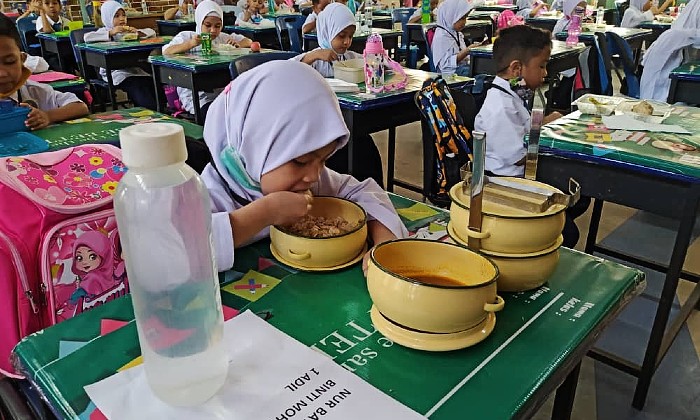 Malaysians recently gained a fascination over the humble tiffin food canister when images of a little girl carrying one for her school lunch made her stand out from the rest of her class as well as on social media.

Hungry for some knowledge, TRP takes a look into the sweet and savoury history of these unique lunch boxes and how its invention influenced our culinary experiences.

So what are they and where did they come from?

The tiffin or “mangkuk tingkat” (levelled bowls) as some locals call it, serves the simple function as a pail for storing and carrying food – keeping people’s meals safe and warm throughout the centuries.

Its origins can be traced back to ancient India, as labourers and merchants needed a way to enjoy a good home-cooked meal while out working in the sun or travelling off to faraway places on the Silk Road.

The “dabba”, as it is referred to there, are typically made of metal and are usually round in shape with individual canisters stacked on top of one another and secured together by a strap – conveniently separating dry and wet foods as well as making things portable and easy to handle.

Then came the British

Use of the dabbas became widespread in Asia, thanks to the British Empire.

In fact, it’s said that it was the English who coined the word “tiffin” sometime between the 18th and 19th century, describing the act of drinking diluted liquor or “tiff” during the afternoon in India’s hot climate. Somehow along the way the word became stuck and synonymous with the lunch box containers we know of today.

The dabbas was such a convenient way to carry food that the British brought it all the way to Singapore and used it to serve meals to distinguished guests at the iconic Raffles Hotel which has been around since the 1880s.

Cultures around the world soon adopted the use of the dabbas, creating their own variations like the rattan made “rantang” from Indonesia or the ceramic “ua chan” or “sia nah” used by the Chinese as well as the Baba Nyonya community in Melaka.

The convenient container also helped with our longstanding tradition of trading meals with friends and neighbors – filling each layer with delectable dishes, fresh fruits and sweet pastries to share.

When India began modernizing, the dabbas became an essential part of life for the people working in the cities who found it difficult to have a satisfying and inexpensive lunch. The desire for a wholesome meal soon transformed into the revolutionary “dabbawala” food delivery system which has fed the nation for over 100 years.

As the story goes, a banker in the 1890s had come up with the idea of hiring someone to deliver his home-cooked meals to the office during lunchtime.

Now years later, each morning an army of delivery men known as the dabbawalas or “those who carry pails” would come door to door to pick up home-cooked meals made by wives and mothers and ship them off to the men who are working in the cities by whatever means necessary – either by trains or caring the meals around on carts, bicycles and even by hand.

More than 80 million meals a day are transported and delivered with the dabbawala system, making it one of the best delivery services in the world able to provide people with their hot homecooked meals on time, every time.