The used cooking oil soap is surprisingly gentle on the hands and highly effective for household cleaning. 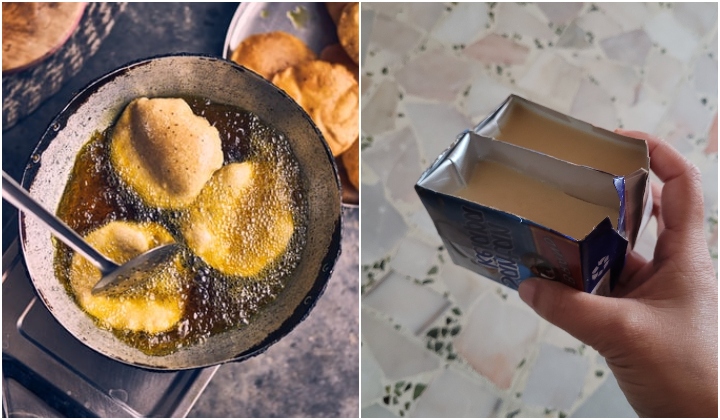 Instead of dumping used cooking oil down the drain, one particularly savvy Kuantan-based woman decided to turn the nasty waste into handmade soap!

Twitter user Noor Jehan Abu Bakar (MokMeow) took to the social media platform to share how she turned 2kgs of used cooking oil into soap, much to the delight of Malaysians online who were in awe of the transformation.

Noor Jehan told TRP that she has been making soaps for the past 4 years, and became a soap vendor at a cafe in Kuantan after retiring from her legal practice two years ago.

That is where I saw that used oils are kind of hard to dispose of, short of just pouring them down the drain.

Uneasy with the amount of waste, the cafe began making their own soaps to use for general cleaning, like mopping and wiping tables!

The lawyer-cum-environmental activist explains that she also reuses PET boxes from food and drinks packaging, as well as single use plastic containers from pasar malams as soap moulds. So it’s completely zero waste!

This way, we keep reusing stuff around the house and not just chucking them out to lay in the landfills for many years to come.

The problem with throwing used cooking oil down the drain

The Malaysian Palm Oil Council (MPOC) explains that pouring used cooking oil down the kitchen sink and into the drain is detrimental to the environment as well as the government’s coffers.

The fats, oil and grease congeal and solidify to form blockages. Even if you break down the oil with soap and hot water, it can re-solidify once it cools down and cause drain pipes and sewers to get blocked.

Not only that, the oil can make its way into rivers and lakes where it can cause devastating physical effects, such as coating animals and plants with oil and suffocating them by oxygen depletion.

In fact, MPOB recommends that used cooking oil be disposed of in a sealed container that’s placed in a sealed plastic bag and brought to recycling centres which can be used to make soaps, candles, as well as renewable energy.

READ MORE: Malaysia Please Don’t Throw Away Your Used Cooking Oil, Do This Instead

So, does the cooking oil soap work well?

“Yes!” says Noor Jehan, it is as good as any store bought ones., just without the artificial fragrances and colourings.”

The only ingredients it contains are oils, water and lye, but the lye is removed after 48 hours via the saponification process in soap making.

She explains that the upcycled cooking oil soap is good for people with dry skin problems who are allergic to hash chemicals in dishwashing soap.

However, she cautions that it’s not too beneficial as a body soap.

But they work great as dishwashing soaps, general cleansing soaps and laundry soap.

Noor Jehan – who is also chairperson of the Malaysian Nature Society Pahang branch- recommends diluting the soap in water and adding essential oils such as tea tree oil or eucalyptus oil for ease of use.

Spurred by the success of the soapy creations, she began teaching communities on how to make their own household soaps as well, such as Wanita Ikram Negeri Pahang, Drug Intervention Community and other NGOs.

Sometimes if she makes extra, the environmentalist also donates her creations to nearby orphanages or old folks homes to help them reduce their operating costs.

How to turn your used cooking oil into soap

Noor Jehan’s cooking oil soap recipe is pretty simple, she preboils the used cooking oil with pandan and lemongrass to get rid of the soap.

Then, she mixes it with water and lye (sodium hydroxide) which are then poured into moulds. After 24 hours, the soap is ready to be used.

For more tips on the process, check out Noor Jehan’s Twitter thread below:

I processed 2kgs of used cooking oil into soaps today.

Source: How to Dispose of Used Cooking Oil: The Sustainable Way Why You Should Never Pour Hot Oil Down The Drain Of Your Sink Vegetable Oils and Animal Fats
Tags
cooking oil eco soap upcycle zero waste

Why Are Your Gifts Being Wrapped In Just Cloth Nowadays?