Good Samaritans tried to ask for the compound to be waived due to the circumstances, but the request was denied. 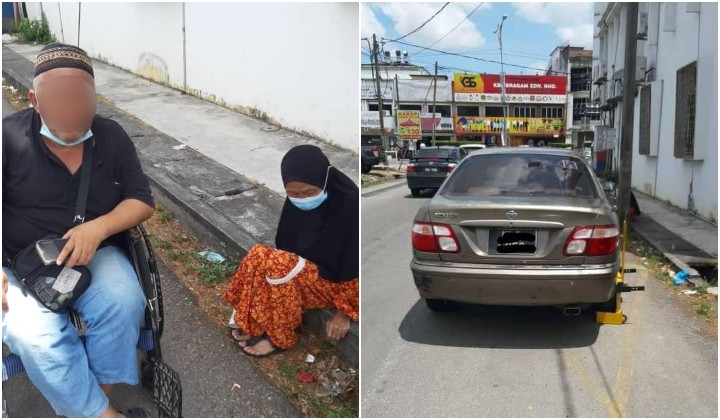 In a display of solidarity, Malaysians banded together online in rage over the news of an elderly couple who were stranded on the street for hours in Kota Bharu, Kelantan because they couldn’t afford a parking compound.

The incident shared by Facebook user Mustaqeem Yusoff explained that the eldely couple were left stranded for two hours when their car parked on the street had been clamped by CityCarPark.

The elderly man was wheelchair-bound while his wife was a cancer patient, and the couple could not afford the RM100 compound.

Mustaqeem explained that he had received a call around 1pm yesterday (7 March) about the elderly couple’s predicament. He and a friend then rang up CityCarPark to ask for the compound to be waived, considering the extenuating circumstances.

However, their request was denied.

But all hope was not lost as the two men decided to help the frail couple pay the compound and even gave them some extra cash to help.

In a matter of hours, the incident was picked up by Malaysians and spread across social media platforms.

Malaysians online were largely enraged by the incident, with several comments calling the treatment of the elderly couple heartless and lacking empathy – especially in these difficult times.

Some even pointed out that parking problems were common in this area as there were not enough spots available.