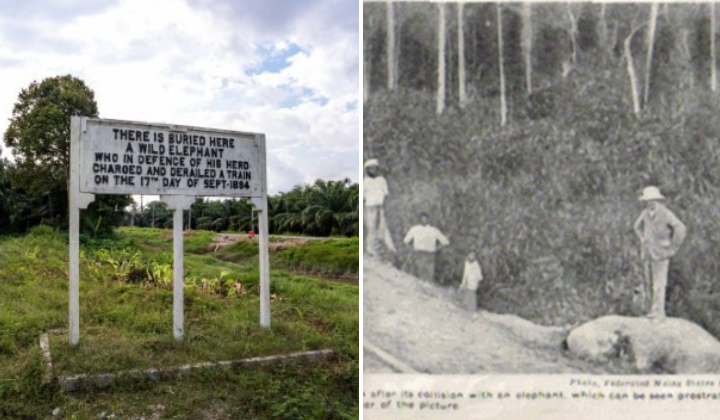 A quick trip onto social media platform Reddit turned into a history lesson when someone shared a picture of a signboard erected in Teluk Intan, Perak.

127 years ago, a wild elephant had stood its ground against a train- an act so legendary that the elephant’s heroics are still being talked about today with its own memorial at Sungai Kerawai, Teluk Intan.

When Malaysia still had roaming elephants…

Then, the railways were built by the British in 1885. Our first ever railway was between Taiping and Port Weld, opened by the British to transport tin from the mines in Larut. In 1886, the line expanded to connect Kuala Lumpur and Klang. In 1891, a new line was constructed between Seremban and Port Dickson.

This new steam engine train whistled through the jungle and shook the ground on its daily trips to and from Teluk Anson, without regard for anything that stood in its way.

According to local legend, the gentle giants paid the trains no mind until one fateful day in 1894, when an elephant calf was hit by the train and died.

It was only then that the bull elephant returned the next day, facing the train head-on to protect his family, standing his ground on the tracks refusing to move.

His act of retaliation derailed the train’s engine and three carriages, allegedly resulting in two deaths and many injuries, although official reports suggest that there were no casualties.

Although the bull elephant was physically bigger than the train, muscle is no match for metal hurtling at 50 mph (around 100km/h). Sadly, the elephant died on the spot.

The British government were so moved by this wild elephant that they set up the Sungai Kerawai Elephant Memorial as a reminder of the incident, which still stands proudly a century later.

Although it lay forgotten as the railway line was discontinued in the 1980s, the signage was restored in 2018 by the History Enthusiasts Society of Perak (Persatuan Pencinta Sejarah Masyarakat Perak) and the Artist Association of Teluk Intan (Persatuan Pelukis Teluk Intan).

Efforts were taken to preserve the skull and tusk of the elephant (which is currently displayed in the Taiping Museum), and the hip bones which measured almost 1 meter in height are displayed at the Johor Bahru KTMB (Keretapi Tanah Melayu Berhad) mini museum.