The postman has been suspended after the incident went viral. 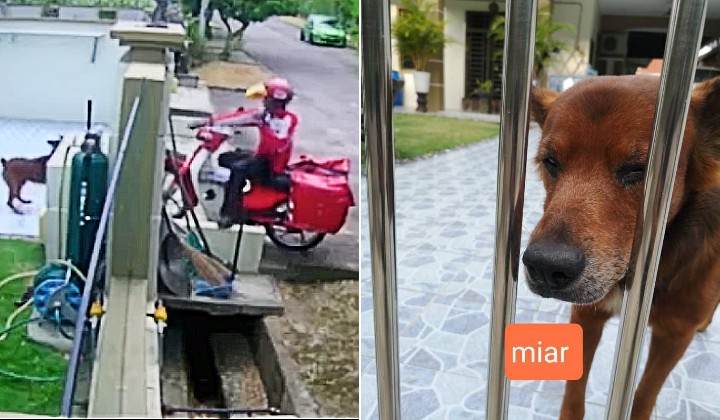 Netizens were enraged by a CCTV footage showing a postman pulling out a “lastik” or a rubber band slingshot, on a poor pupper at a residence belonging to a Mr Sivam from Kluang, Johor.

The footage which was originally shared on social media by local animal welfare NGO Malaysia Independent Animal Rescue (MIAR) placed the postman at the scene on 22 February. Mr Sivam had apparently reached MIAR for assistance after his dog was injured.

In the 21-second clip, the red uniformed postman on a motorcycle was seen lining up his shot at the dog that came to approach him from the other side of the gated property. With his right arm fully stretched to pull back his “weapon”, the man then fired at the animal before it quickly scurried away in pain.

What’s going on with your postman. Abusing dog ! Please take action on him. He was hurting the dog with a lastik ( catapult) while the dog was inside the compound and was not out.
So what action are you gonna take @pos4you ?!

Please help me retweet this and tag POS Malaysia 🙂 pic.twitter.com/w9Zar5VM9N

MIAR revealed that the dog had sustained injuries to its left eye from the attack. A police report had also been filed concerning the matter and the NGO was apparently having its lawyers help Mr. Sivam, the dog’s owner, pursue legal action.

Catching wind of the situation, Malaysians took to Pos Malaysia Berhad’s Facebook page for retribution where many had argued for the company to take disciplinary action on its employee.

MIAR later came to share that Mr Sivam had been in contact with Pos Malaysia who told him that the postmen guilty of attacking his pet had supposedly been terminated from work.

Apparently, the company’s representatives had wanted to meet with Mr Sivam to drop the charges made against them. Mr Sivam however had refused to do so.

In response to the matter, Pos Malaysia told TRP that the employee in question has been suspended from duty pending a full investigation. Pos Malaysia also asserts that they do not take cases of animal abuse lightly.

We have identified the postman in the video and he has been immediately suspended pending the outcome of the investigation. Pos Malaysia will not tolerate such misconduct from any of our employees and will not hesitate to take stern action, which include termination of service.

Section 29 of the Animal Welfare Act 2015 finds anyone guilty of cruelty by hurting, torturing or terrifying an animal facing fines of up to RM100,000 or up to three years in prison, or both.

Read More: How Malaysians Are Unknowingly Abusing Their Pets? Find Out If You’re Guilty