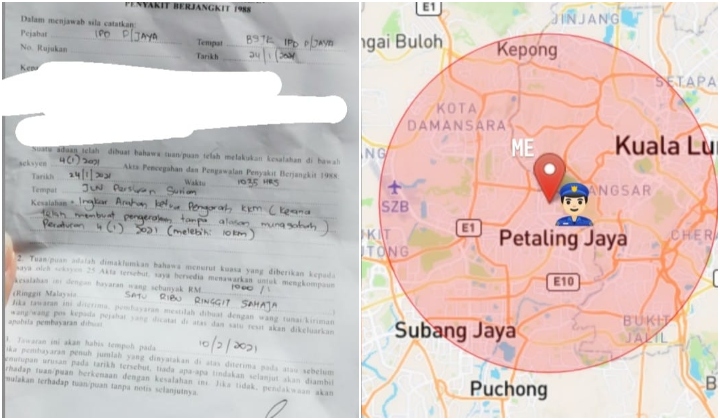 An individual living in Petaling Jaya has just faced what many of us have probably been worrying about ever since this Movement Control Order (MCO) 2.0 was implemented.

After leaving their house to pick up some supplies at the supermarket, the individual was stopped at a police roadblock and fined, supposedly for travelling outside the 10 km radius allowed by the government.

In the incident shared on We Are Malaysian Facebook page, the original poster (OP) said she had ventured out from her home at around 10 am on Sunday (24 Jan) to buy groceries. On her way out, she was stopped by police at a roadblock.

OP explained to the police officers that she was going out to buy food and groceries nearby, adding that she had checked Waze and confirmed that the journey was within 10 km radius of her house.

OP shared in the post that this was her first time being stopped for such an issue at a roadblock, adding that she was completely speechless and confused.

If Waze is not tepat (accurate) I’ve no idea which is tepat other than Google.

READ MORE: Not Sure How Far 10KM Is From Your Home? A Shah Alam Systems Engineer Created A Website To Help

The police subsequently asked OP for her IC and directed her to pull over at the side of the road. Then, another police officer walked up and took OP’s details.

OP explained politely to this other officer that she had just left her home and was still within 10 km. Unfortunately, OP said the officers didn’t believe her and insisted that OP was breaching MCO standard operating procedures (SOP).

I went back home disappointed without [the] things that I need. I checked other official apps, as shown, I’m definitely less than 10km.

Police officers are as confused as we are?

Most of those who responded to the post suggested that our police officers are likely confused by the frequently changing SOPs, just as we are.

Some mentioned that the police can’t know for sure where you live, and are thus going according to the address stated on your IC. However, some use their hometown addresses for their IC and it doesn’t always reflect where some Malaysians truly stay.

Others wondered if OP was fined because she was travelling further than she needed to for supplies, questioning her if there were shops closer than the ones she was heading to.

What does the official MCO SOP say?

Two people from each household are allowed to go out for essential items such as food, medicine, dietary supplements and other necessities, no further than 10 km from their home OR to the place nearest their home if the item is not available within 10 km.

According to the official MCO SOP on the National Security Council’s (NSC) website, members of the public are allowed to leave their homes to get supplies such as food and they must only travel within 10 km of their home for those items.

However, there is a caveat.

If the item is not available within 10 km of their home, they are allowed to travel past that radius to the next nearest place.

The SOP does not say that we must go to the nearest place, only that we must not travel further than 10km unless it is absolutely necessary.