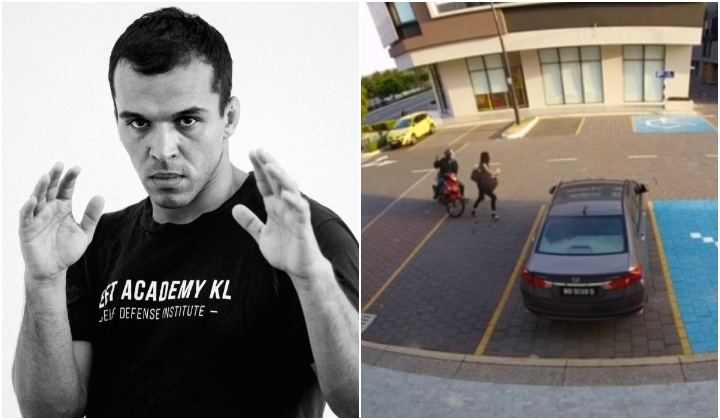 Responding to a recent incident, a self-defence instructor shared with us some tips on how women can protect themselves during snatch thefts, robberies, or any other incidence of crime or aggression.

Why women, specifically? Ben Abbes Jihad, 36, who has 10 years of experience in teaching self-defence, explains that women are often the first victims of crime, “during times of peace, as in times of war”.

With the added fact that the world is currently experiencing a pandemic and most of Malaysia being under a movement control order (MCO), this means that people are desperate for money, the streets are empty, and people are isolated.

This provides the perfect opportunity for crimes such as snatch thefts and robberies.

Perfect conditions for a crime

There is absolutely nothing exceptional and surprising in this aggression. One should be aware that this will happen again to another woman in a similar context.

Ben said that in this particular case, the thief’s behaviour was an absolute classic.

He is riding a small bike which makes escaping easy, he is targeting a woman alone in an isolated area such as a parking lot, and he is carrying a weapon to deter the victim from resisting.

Meanwhile, he said the victim was likely targeted because women are seen as “less resistant”, she’s carrying a bag which potentially contains money or other valuables, and she is alone in an isolated area and vulnerable to attack.

It was absolutely not her fault. The victim was simply at the wrong place, at the wrong time. It could happen to any of us.

According to Ben, in the video the woman is in an absolute state of helplessness. He explains that most people are neither used to, nor ever ready for an assault. When it happens, most are in total loss of what to do, and rely on their basic instincts to survive.

However, that doesn’t mean these basic instincts are good for survival.

Here are some things Ben advises we should do and never do, in a similar scenario.

99% of the time, these types of snatch theft aggressors are desperate for money or any other valuables they can sell or exchange for drugs or other things. This is an obvious motive in this particular case, as the robber came back to grab the victim’s mobile phone as well.

Ben advises throwing your handbag in the opposite direction from where you are running.

Your life is worth more than money or your mobile phone. Once the aggressor realises he has what he wanted, he may let you go. This is an option that provides you with the least harm possible and prevents the worst-case scenario – being injured by the weapon (in this case, a parang, no less).

It’s a lose-lose case if you try to resist. Unless you have been trained in the military, or are a self-defence instructor. It’s not worth the fight.

Get back into your car and lock the door.

If you don’t have a car, run into a nearby shop, run into a house, or use a rubbish bin or a chair, anything, to shield yourself and create space between you and your aggressor.

All of this is after you have thrown your bag.

By applying the principle of distraction – with throwing your bag – you give yourself the chance to run away safely.

Although this has already been mentioned above, it’s worth repeating. Renounce your things as fast as possible and you will reduce the chances of being injured in the assault.

It is just physically impossible, and even harder to do while wearing heels.

Ben advises women to change their heels for sneakers as soon as they leave work.

Injuries from a parang will incapacitate you, at best for a few months, at worst for the rest of your life.

Ask yourself: is it worth it? Give them the bag.

Don’t hold onto your bag, let it go. The faster the aggressor gets what he wants, the sooner he’ll leave you alone.

Other things to keep in mind

Always be aware of your surroundings

Situational awareness is one of the first things we teach our students.

Besides that, try not to keep all your valuables in one bag. Carry just a copy of your important identification details, a bit of cash, and one bank card in your bag. Store the rest of your valuables elsewhere.

Ask yourself in the morning, if I lose this bag, will I lose everything? And act accordingly.

Sometimes, you will need to fight for your life

In cases of sexual or physical assault, or when your loved one is danger you will need to fight for your life by any means necessary.

The rule is: there is no rules. Fight with any means necessary to survive.

Ben explains that this is the part that requires specific training and conditioning. He shares that learning martial arts can sometimes help, but is often irrelevant in cases of street aggression.

For an individual to increase their chance of survival during an assault in the street, they should train specifically in self-defence methods recognised by legitimate experts.

What about the woman’s car?

Ben advises that when leaving your car, keep your keys in your hands until you reach your home or office.

He explains that a car can provide a temporary safe space and even allow you to escape if you succeed to start it and move away from the location of the assault.

Once you are in your car and start driving, the aggressor will likely move away as he now knows he has totally lost his chance here and any contact between his bike and your car will be at your advantage.

But, should you run him over?

The section states that every person has a right, subject to the restrictions contained in Section 99, to defend his own body, the body of any other person, and his property against any crime that falls under the definition of theft, robbery, mischief or criminal trespass.

Ben explains that when defending oneself, one can retaliate to the point of causing death only when the aggression is believed to threaten your own life, such as being badly injured or kidnapped.

You may read more on the issue in a post on Jeet Academy’s blog (HERE) which is also the gym where Ben teaches various types of combat sport for self-defence purposes, including Krav Maga.

“You think it will never happen to you, until it does.”

Ben emphasises that the victim is not at fault for what happened to her, adding that all we can do is try to prepare ourselves for whenever we are faced with a similar situation. These things can happen to anyone.

He says that following at least a few hours of a self-defence course can help you become more aware in your daily life and the potential dangers that can happen.

You will never become a superhero just from learning self-defence, but you can learn to be more comfortable in the uncomfortable and speed up your decision-making process, knowing at least what is the worst-case scenario.

He also wishes for the victim’s swift recovery and extends his assistance to her when she is ready to talk about what happened and has recovered.

All my compassion and prayer for recovery go to the victim. She did nothing to deserve what happened to her. It is not her fault and we can only wish she’ll be back to her family soon. I am there for her if she wants to talk about her story and recall the event once she has recovered.

For those interested in learning more about self-defence, you may visit Jeet Academy’s website (HERE) for more information. The academy also has online classes for the whole family to take part in while the pandemic and MCO continues.