It’s a lot further than you probably think. 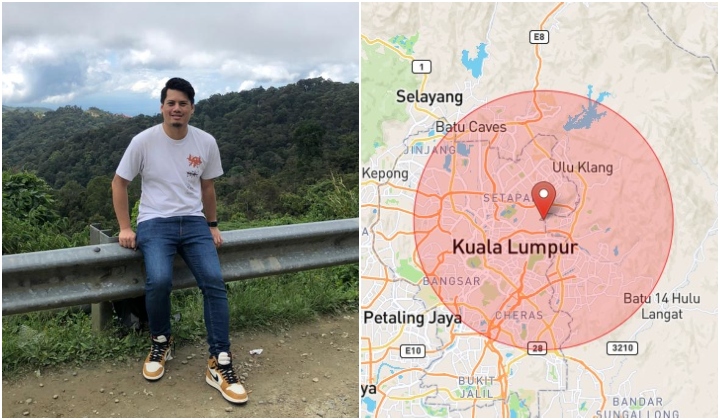 In the six Malaysian states under their second round of Movement Control Order (MCO), residents have not only been prohibited from travelling across state and district borders, but they’re also not allowed to venture out further than a 10km radius from their homes.

This has left a lot of people wondering how far is a 10km radius exactly, and how would they explain this to police officers manning the MCO roadblocks.

Maximum distance you can travel during MCO 2.0

To help solve this problem, Asyraf Adlan, a Malaysian systems engineer, and his team, set up an online tool called GetMakan, that draws a 10km radius circle around your area of residence to show how far 10km is from your home.

Using the tool is super simple. All you have to do is visit the website (HERE), click “Lihat Radius Saya”, allow the app to detect your location, and a map with a red circle will pop up.

Everything inside the red circle is within 10km from your home.

However, for those living close to district or state borders, do keep in mind that inter-district and inter-state travel is still not allowed.

Speaking to TRP, Asyraf, who hails from Shah Alam said that he and his team initially set up Getmakan during the first MCO for people to use to buy and sell food.

Getmakan is a food marketplace focusing mainly on food stalls and home cooks.

Asyraf admitted that setting up the platform was no easy feat, considering the fact that despite his background in engineering, he learned systems and app development on his own using reference articles on the internet.

However, the Australian graduate in Electronics and Communication Engineering soldiered on, explaining that he and his team was motivated by the fact that they really wanted to help small businesses suffering from the pandemic increase their sales and digitize their business.

As such, the online platform offers a variety of free features for merchants, including their very own shop page they can share to friends, family, and potential customers.

He added that getting merchants onboard and gaining trust, as well as the and confidence of consumers, was a challenge, too.

Meanwhile, the 10km distance measuring tool was only added after MCO 2.0 hit. Asyraf said this new tool is a free add-on feature that anyone can use to see the maximum distance they can travel under this MCO.