The study revealed that mamak workers on average were only allowed to take leave after being employed for at least 3 years. 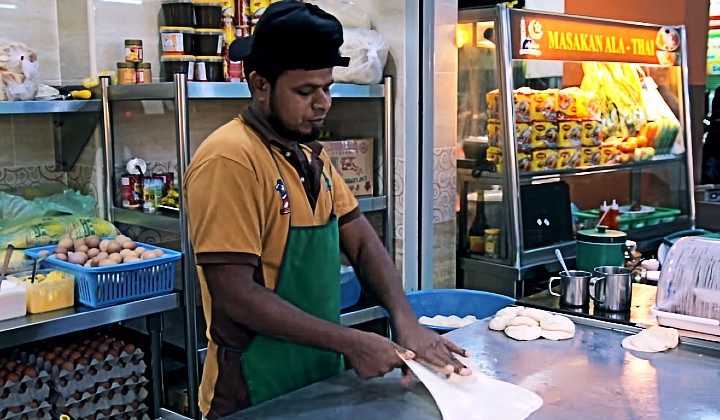 A group of law students from Universiti Teknologi MARA (UiTM) did a small study that shed light on just how hard your local mamak restaurant workers hustle to make an honest living.

Sharing their research on social media, the team highlighted some concerning evidence that mamak workers in Shah Alam, and maybe across the country, are being overworked.

Speaking to TRP, UiTM Faculty of Law student Awangku Ariff Radin Awang Ariffin said that he and his teammates; Jihan Azman, Nurizati Kafiya Sidek and Nur Fadhila Dahlan were tasked with an assignment to investigate the level of public awareness on the Malaysian Employment Act 1955.

From a small interview sample of between one to three workers from nine different mamak stalls in Shah Alam, the researchers concluded that 95% of the respondents were working shifts of up to 12 hours a day.

Their study also revealed that workers on average only get 5.33 days of annual leave a year and were only allowed to take leave after being employed for at least three years.

Providing a full disclaimer regarding their research, Awangku Ariff explained that because the team only interviewed a small number of respondents within a period of one month, their research data might not accurately reflect the real world.

He also shared on Twitter that the team had faced some difficulties in acquiring data for their research as they had to convince mamak workers that they were not from law enforcement.

Further, he mentioned that many employees are simply afraid to come forward about their abusive working conditions.

Imagine working more than 12 hours a day, breaks only for a few minutes and cuti jumpa family only after 3 years of working. Even then, cuti sekejap je.

Cannot confirm if authorities are monitoring this issue with mamak or not. Because theyre scared to reporting any abuse.

Employment Act 1955 protects all local and legally employed foreign workers in Malaysia who earn no more than RM2,000 per-month as well as all manual labourers regardless of their earnings.

Under the law, each employee is entitled to one whole day of “rest day” in each week and any worker who is required to work on their off days are entitled to be paid one additional day wages at his or her ordinary rate of pay.

The law also dictates that an employee may not work for more than eight hours per day and no more than 48 hours per week.

According to a BBC report in 2011, many mamak or Indian restaurants in Malaysia employ foreign workers, mainly from India, as locals do not want to work in the industry because of the long working hours and its low wages in comparison to the cost of living in the country.

However, the dismal pay – of around RM1,800 per-month – is still said to be three times higher than what a foreign worker would normally receive if they worked in their home countries.

A report from Amnesty International also revealed that the majority of foreign and migrant workers in Malaysia – from Bangladesh, India, Indonesia, Nepal, Vietnam and other countries – face exploitation and unsafe working conditions besides being exposed to physical and verbal abuse by employers.

Migrant workers are also “trapped” into unrealistic employment contracts and have to pay fees, where one would spend upwards of RM4,000 for a chance to come to work in Malaysia.

In 2016, a restaurant called Mamak, a Malaysian street food joint in Sydney, Australia, received fines of over RM890,000 for underpaying its employees and allegedly tried to make no big deal out of it.

The workers were reportedly shortchanged out of their paychecks and said to have only received between RM37 to RM40 per-hour for at least three years when their hourly rate should have been over RM54.

Get Ready Employees! You Can Request For Flexible Work Arrangements From Your Employer Starting 1 September