These cats are having the time of their (nine) lives. 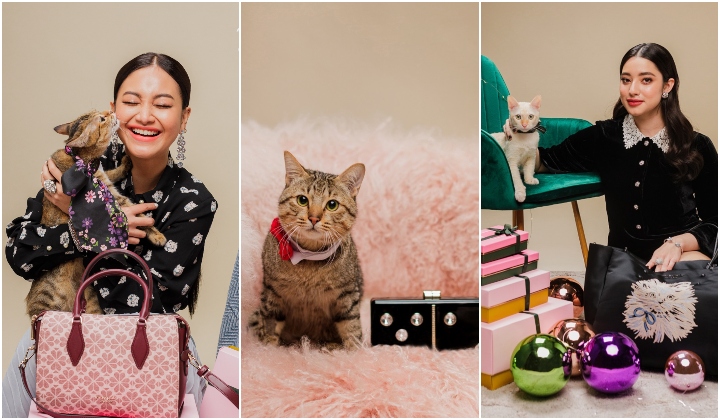 If you’ve been browsing around the internet, you might be surprised by the sight of kitties in diapers, wrapped in bandages or a missing limb posing like the cat goddesses they are for luxury fashion brand Kate Spade New York’s holiday campaign.

No, your eyes aren’t playing tricks because our local strays have indeed become supermeowdels!

These precious kitties aren’t from any NGO either, they’ve actually been rescued by a group of 9 friends who came together organically to collaborate and form an independent animal rescue team called Allergic Rescuers KL.

Inspired by the cat motifs from their holiday collection, Kate Spade New York decided to feature these seven miracle rescue cats to spread awareness on the act of pet adoption this holiday season.

From sidewalk to cat-walk

But the collaboration between Kate Spade New York and Allergic Rescuers KL does feel like its been preordained in the stars as one of the founders, Rosy Kim, was previously working at a fashion company in Hong Kong.

Not only that, the way Allergic Rescuers KL has been efficiently rescuing, treating medically and rehoming the animals is actually inspired by Rosy’s experience in fashion merchandising!

The earnest cat lover keeps a detailed database of all the rescue cats. The information is then analysed to identify the types of cats that get adopted quickly, and which ones need some extra boost through “advertising” (aka detailed social media posts and lots of cute pictures!)

A quick scroll through the Allergic Rescuers KL Instagram account reveals a stunning variety of cats of various colours, ages and health statuses complete with a rich narrative behind each kitty’s life story so that potential adopters can find a cat of their dreams within their network.

Obviously, the stakes are so much higher in cat adoption than selling a pair of shoes because we are talking about very real lives, and cats that we are emotionally attached to. But the business strategies helped.

Despite carrying out small-scale rescue & rehoming, and TNR (trap-neuter-return) activities in their own neighborhoods, the concentrated efforts of these nine friends and numerous supporters have resulted in an impressive track record of 432 rescues (427 cats and 5 dogs) and 352 adoptions since 2018!

But this meticulous attention to detail doesn’t stop just at the cats, it extends into screening potential adopters as well.

The adoption process at Allergic Rescuers KL is a multi-step process that includes an online application form with thorough questions on one’s ability to care for a pet, video calls, an in-person meet & greet between potential adopters and the cat(s), as well as an adoption contract.

We are very very careful about choosing homes for our rescues because this is the cat’s life we’re talking about. We just want to make sure they find a loving, forever home that will treat them as a member of the family for the next 15-20 years rather than “just” a pet. It’s the least we can do for these poor animals often coming from very rough beginnings.

There’s also an adoption donation – which sometimes raises eyebrows – but the money goes into funding the medical treatments for the other rescues as Allergic Rescuers KL is simply a group of volunteers that spend around RM500 per rescue.

All the cats are vaccinated, tested for viruses and spayed/neutered (if of age). The team also doesn’t skimp on hospitalization, intensive care, surgeries or chronic medication for the rescues.

We insist on giving them the best medical care possible because we truly believe that this is the best way to find them loving, forever homes.

The team’s rescue efforts run 100% on donations and every penny goes into getting the cats healthy and adoption ready.

When people ask for our help in taking in an animal and we ask for a surrender fee, they completely balk. “Isn’t this what you’re supposed to do?” they’ll ask. But no actually, it’s not what we are supposed to do. No one in our team is paid for their time, effort, fostering, and it’s purely voluntary. So we do what we can, but to keep us going, we do need people to contribute and also take on responsibility themselves too.

With so much interest drummed up by the Kate Spade New York shoot, along with years of concentrated efforts, Allergic Rescuers KL is considering registering as an official NGO society to have a bank account with tax-deductible donations. But that’s something they’re still pondering on.

In the meantime, anyone who wants to help these animal-loving, amazing souls in their selfless endeavours, here’s four things you can do: