From heart-pumping action to tear-jerking drama films, this list has it all! 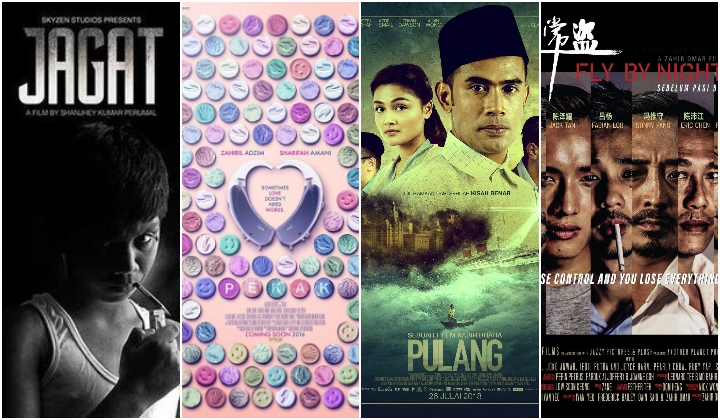 So, there is a pandemic going on and you’re playing your part as a responsible citizen by staying indoors. To distract yourself from the outside world, here are some critically acclaimed Malaysian movies that you can binge-watch and enjoy on Netflix.

If you are a fan of some good old science fiction with a strong plot and beautiful effects, then this movie is for you.

Desolation centers around Aiman, a disillusioned artist stuck in another dimension after a fight with his father.

As he begins to embrace his lonely eternity, the artist meets a mysterious woman named Maya, who begins to unravel the reality surrounding Aiman’s impending situation.

Based on Director Mohd Syafiq bin Mohd Yusof’s personal childhood experience, the 2016 film is a mind-boggling tale aimed to challenge the minds of the audience.

Despite the astounding effects in graphics and sound, the main message showcases the importance of family ties. On the last day of screening, Desolation grossed RM 2.5 million, additionally winning two awards in 2017.

Yusof was awarded both the Special Jury Award (Visual Special Effects) at the 28th Malaysian Film Festival and Best Director at the PROFIMA Award Ceremony in 2017, a year after the film’s release.

Craving for something that centers around patriotism and family love, then this film is right up your alley.

Directed by Kabir Bhatia, Pulang is a riveting drama film that focuses on a grandson’s quest to bring home his long lost grandfather after he goes missing in search of fame and fortune 61 years ago.

Pulang evokes poignant feelings surrounding the love for one’s country and a person’s sense of identity.

Based on true events, the film stars Mohammed Zalimei bin Ishak and Puteri Aishah binti Sulaiman in the leading roles.

Step into the painful world of drugs, sex and abuse in this heart-breaking tale of love and loss.

Pekak follows the story of Uda, a deaf drug dealer looking for a quick way to earn money for a cochlear implant.

Used to a life of crime, Uda begins to change his ways after falling in love with Dara, an innocent teenager.

Despite the film’s appearance, Pekak is not for the faint of heart as it is a thought-provoking production that explores the blurred lines of friendship and betrayal.

Besides that, the film also looks between the roles of a hero and a villain and the cost that comes along with it.

The film was first aired at the Cannes Film Festival on the 17th of May 2016. Pekak was then released in cinemas nationwide on the 1st of September in the same year.

Known to be one of the best local Tamil films to be made, Jagat focuses on the issues faced by the rural Malaysian Indian communities from the early ’90s.

Named as one of the best local Indian films ever made, Jagat depicts the life of a mischievous young boy named Appoy and his struggle with studies and a life of crime.

Finding it difficult to keep up in school, Appoy is constantly pushed to excel by his immigrant father, who wishes for a better future for his son.

But, Appoy’s father becomes increasingly abusive and it pushes the young boy to be inevitably drawn to his uncle’s criminal lifestyle.

What makes Jagat so special is how it explores the character’s quest for a better life amidst the country’s rapid development.

Surprisingly, Jagat took approximately 10 years to make as the production team was faced with financial issues.

Despite that, the film has gone to win two awards out of four including Best Picture and Best Director at the 28th Malaysian Film Festival.

Additionally, Jagat was also nominated for a whopping 5 categories at the 2016 Kuala Lumpur Film Critics Award, in which the film won all five categories including Best Screenplay and Best Cinematography.

If you like films that are action-packed and filled with adrenaline, then Paskal is the movie for you.

Loosely based on real-life events, the film focuses on the Royal Malaysian Navy, specifically the Lieutenant Commander.

Together, the team undergoes a rescue mission to liberate a tanker that was taken hostage by vicious Somalian pirates in the Gulf of Aden.

This action-filled movie centers around a series of strategies and rescue tactics used throughout the operation.

Besides that, Paskal offers the audience an insight into the tedious training regimen of the Royal Malaysian Navy force.

The film also showcases the duties needed to be handled by the force, something that many regular civilians may not be aware of, making this movie all the more educational.

With a budget of RM10 million, Paskal stands to be the most expensive Malaysian film ever made.

The shooting was conducted in locations in and out of Malaysia such as Lumut, Semporna, and Istanbul, Turkey.

Directed by Adrian Teh, Paskal features the talents of Hairul Azreen bin Idris, Ammar Alfian, and Henly Hii in the leading roles.

Sangkar is a drama action film that focuses on the rivalry and redemption of two mixed martial arts (MMA) fighters Adam and Johan.

The first Malaysian MMA film ever produced, this film delivers more than its gritty fight scenes as it explores both characters on a deeper scale, diving into human mistakes and the meaning of vindication.

Other than that, Sangkar also shines a light on the grueling training and mental anguish faced by MMA athletes.

However, things spiral out of control as they are forced to confront a corrupt cop and a ruthless crime mobster.

According to Malay Mail, director Zahir Omar explains how this film draws inspiration from the phrase “nothing is what it seems”.

It gives a fresh outlook on the possible double lives of the people we meet, specifically cab drives whom we entrust in taking us from one point to another without really knowing who they truly are.

Fly By Night was directed by Omar in his first directorial debut, and features familiar names such as Bront Palarae as the corrupt police officer, Inspector Kamal.

The film screened at the 3rd International Film Festival and Awards Macao (IFFAM) and the 2018 Jogja-NETPAC Asian Film Festival.

Additionally, the film had its world premiere at the 23rd Busan International Film Festival on October 28 last year.

Other than that, it was selected to be screened at the 2019 New York Asian Film Festival and Santa Barbara International Film Festival, to which it received positive reviews.

We hope that this selection has inspired you to watch some of our nation’s finest films, so grab a bowl of popcorn, turn off the lights, sit back and enjoy!