Malaysia has yet to adopt the TNR method. 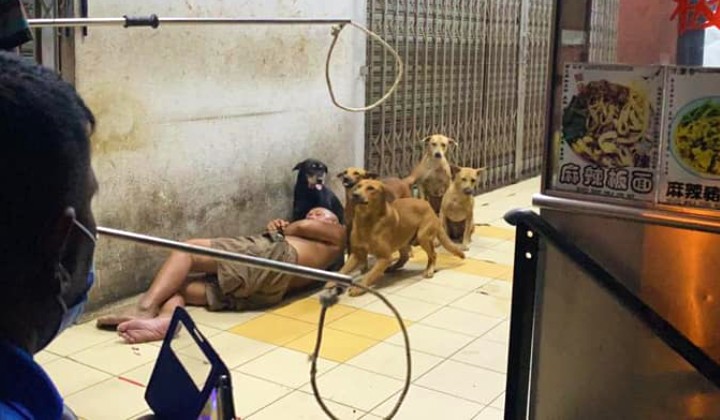 The Kajang City Council posted to Facebook their routine work of catching stray dogs, but probably didn’t expect the backlash from netizens criticizing the whole operation.

While a majority of comments condemned the city council for their heartless actions, even more found it heartbreaking that the city council had rounded up a group of strays that were ‘protecting’ a homeless man sleeping on the street.

Many netizens speculated that the homeless man must have fed the dogs often to befriend them. Thus, when faced with a threat from dogcatchers, they chose to stay put and protect him instead of running away.

Dogs are known for protecting their owners in the face of a threat, so these strays were displaying their loyalty and bravery for their ‘master’- the homeless man!

According to the post, the operation lasted 6½ hours from 8pm to 2:30am. The Department of Public Health & Town Service reported that the operation rounded up a total of 20 stray dogs in various areas within Kajang.

However, netizens suggested that efforts should be put in elsewhere instead of the current cruel way of catching strays.

Many suggested the city council to focus on cleaning out the drains within the vicinity instead as they are often clogged, or picking up the trash along the streets, among others.

Some suggested that the city council adopt a more humane way to control strays, used by many countries around the world: the TNR method.

The Trap-Neuter-Return (TNR) method is well-used to manage stray animals living in human populations, focusing on neutering the animals so they do not reproduce. In the process, the animals are also microchipped, vaccinated, and treated against diseases and fleas to ensure that they are healthy and clean.

Currently, Malaysia does not practice the TNR method in an official capacity. Government agencies still continue to employ a brute method of catching strays and locking them in a pound.

Dogs that are caught are put up for adoption. However, if they are not adopted within seven days, they are put down. As you can imagine, most dogs do not see the light of day again once they are caught.

The Kajang city council has yet to address the issue.

What Exactly Is Feline Parvovirus?

Rescued A Cat/Dog In Malaysia? Here’s What To Do When You Save A Stray Animal