He designed a space toilet for astronauts to use on the moon. 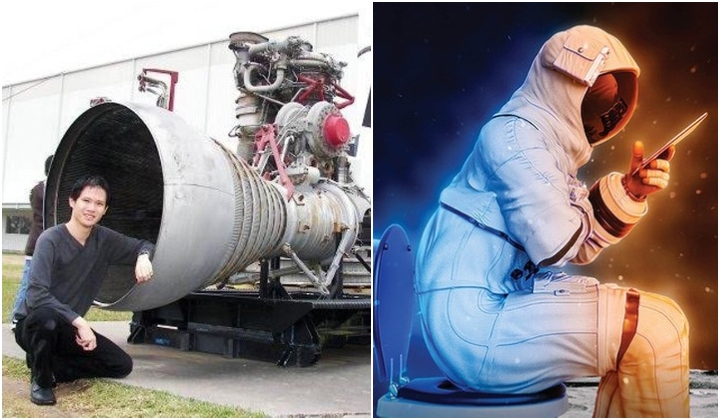 Humans have aspired to live on the moon for years. While most of us have imagined this possibility at one time, those imaginations rarely include how we’d carry out daily necessities – like using the restroom in space.

Yet, Malaysian engineer Kevin Lim Chin Seong has made the country proud by coming up with an excellent space toilet that has earned an honourable mention from the National Aeronautics and Space Administration (NASA) in the United States.

As a part of NASA’s preparation to return to the moon in 2024 under the NASA Artemis Mission, they organised an open challenge, inviting entries for designs of the perfect space loo.

NASA Artemis astronauts will be eating and drinking, and subsequently urinating and defecating in microgravity and lunar gravity. Although space toilets already exist and are in use (such as on the International Space Station), those are designed for use in microgravity only.

This time, NASA’s Human Landing System Program is looking for a next-generation device that is smaller, more efficient, and capable of working in both microgravity and lunar gravity.

The team was blown away by the level of response this challenge received. The entries have given us high-quality, innovative concepts for incorporating into the final toilet design.

The Lunar Loo Challenge, which took off on 25 June this year, garnered more than 2,000 submissions across the globe, including Kevin’s Fully Self-Contained Lunar Toilet. His design won him an honourable mention prize.

According to NASA, the judges evaluated submissions based on capabilities, technical maturity, safety, and overall innovation. Five participants were awarded prizes.

Speaking to Free Malaysia Today, Kevin shared that he came across NASA’s Lunar Loo Challenge on Facebook when they were looking for submissions.

When I first read the challenge, I pretty much had a rough idea. It then took me about two months from writing down the ideas to figuring out how the ideas would work seamlessly with one another.

His goal in participating in the challenge was to share his experiences as an engineer and to draw global attention to Malaysia as well.

While Kevin did not exactly specify how his toilet works, he explained that the design went through multiple stages of calculations before it was formalised using Computer-Aided Design to confirm it was operative and met all specifications.

The simplicity of the design was an important factor so that the astronauts could use the space toilet with relative ease.

Kevin told Free Malaysia Today that he was extremely grateful and happy to have received an honourable mention certificate from NASA, adding that the experience has inspired him to advance his career in research and development.

NASA’s Artemis program includes landing the first woman and next man on the lunar surface by 2024, sending a suite of new science instruments and technology demonstrations to study the Moon and establishing a sustained presence by the end of the decade.

The agency will leverage its Artemis experience and technologies to prepare for the next giant leap – sending astronauts to Mars.