She claims the cluster started at a nearby bar, not her home. 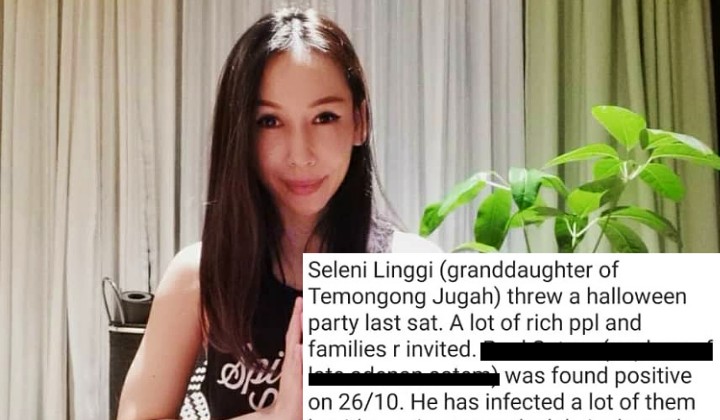 Sarawakkian businesswoman and socialite Sereni Linggi has stepped out with a statement denouncing rumours that blamed her private party as the source of Kuching’s highly infectious Greenhill Covid-19 Cluster.

The messages also named a guest who tested positive for Covid-19 as a “superspreader”.

These texts were in reference to Serena Linggi, the great granddaughter of the late Tun Jugah Barieng and sister to Kapit MP Alexander Nanta Linggi.

With rumors spreading like wildfire, the Sereni Linggi is telling her side of the story.

“Kuching, I’m disappointed in you,” began the statement as Sereni addressed the accusations on her friends and family.

The mother of two then explained that she had organised a small party with close family and friends on 24 October where 16 children were in attendance – all who she said were regularly in contact.

It was casual, we had the gathering in a well ventilated area. In total, there were less than 20 adults in attendance.

Though unaware at the time, one of the parents who attended the gathering was Covid-19 positive which Sereni pointed out likely to have caught the virus from a bar in the Green Hill area.

The Covid-19 positive parent started showing symptoms two days after the party and tested positive on the same day.

Following the result, everyone who attended the party then self-tested themselves for the virus.

There was no cover up. Names were kept confidential from the public because Covid-19 patients are called by case numbers. The cluster did not emerge from our gathering at our home. It was traced back to a bar in the Green Hill Area, hence the name of the cluster.

The socialite-cum-businesswoman also expressly pointed out that no laws were broken and that she had seen weddings and events taking place with over 100 people in confined spaces.

Let me ask you this, can you honestly tell me that you have not been to a friend’s or relative’s home or a restaurant or a public venue for a gathering since March 2020?

Sereni ended the statement with a call to stop spreading rumours without verifying the information and for everyone to stay safe.

As of 30 October, Greenhill Cluster has 36 total infections.

Read her statement in full below:

Kuching Man Bitten By Crocodile Saved Himself By Slapping The Creature