He managed to transform their passing rate from 30% to a whopping 80%! 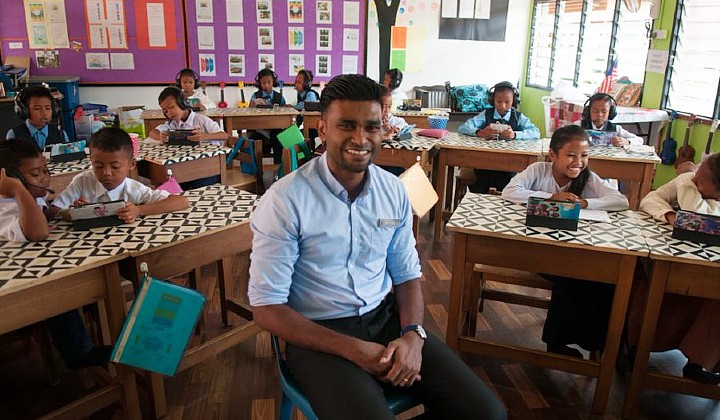 In partnership with UNESCO, the Global Teacher Prize 2020 awards US$1 million to a teacher who has made an outstanding contribution to the profession.

Malaysian teacher Samuel Isaiah has been named a top ten finalist for the Global Teacher Prize 2020, in partnership with @UNESCO. Now in its sixth year, the US$1 million award is the largest prize of its kind. @samuel_isaiah87 #teachersmatter #gtp2020 #tuesdaymotivation pic.twitter.com/8pAuRe9Mrk

In fact, most of you may have already heard of the 33-year-old Cikgu Sam as the teacher who went viral in 2019 for transforming the lives of his Orang Asli students at Sekolah Kebangsaan Runchang, Pahang.

As an English language teacher, he faced an especially difficult challenge as the school is known as the one of the worst-performing in the district.

Other teachers told him “Samuel, you don’t have to do much, they’re just Orang Asli ” while the indigineous students themselves were at a loss with English and rarely attended school.

Determined to change this perception, Cigku Sam began making lessons uniquely appealing to the students – with a ukulele.

He collected funds to give every student an instrument to play and sing while learning the language. He also would go to the Runchang Orang Asli settlement twice a week after school hours to conduct English lessons under trees.

But it didn’t stop there.

Cikgu Sam set up a crowdfunding project to create a fully equipped modern classroom with tablets and computers. With technology on their side, he also launched an e-mail exchange programme called ‘Asli E-Pal’ for the students to write to volunteers across the country and overseas as well.

As a result, the students have rapidly improved their passing rate for English from a meagre 30% to an average of 80%!

These efforts have resulted in a paradigm shift of what indigenous children are considered capable of academically.