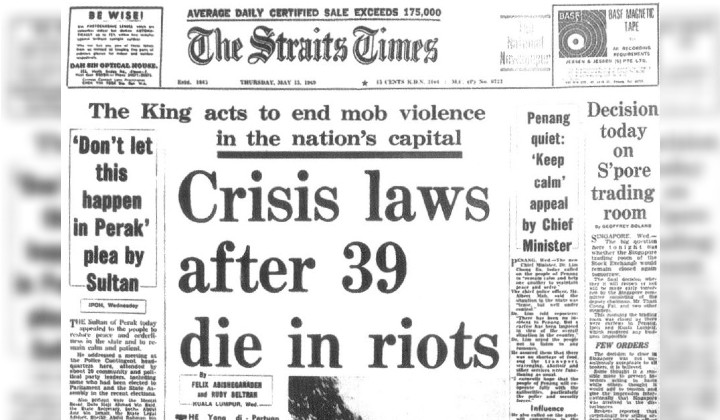 With rumours swirling that Prime Minister Tan Sri Muhyiddin Yassin set to declare a “State of Emergency” today in reaction to the Covid-19 pandemic and political instability, it’s time to dive into history to get some context.

While many are aware of the Malayan Emergency from 1948-1960 against the communist emergency, Malaysia actually went through four states of emergency after its formation in 1963 – two nationwide, and two state-specific emergencies in Sarawak (1966) and Kelantan (1977).

But we’ll look at what happened during the two nationwide emergencies in Malaysia.

The term “Confrontation” was coined by Indonesia’s Foreign Minister, Dr Subandrio, in January 1963, and was marked by a breakdown in political, economic and social relations that eventually led to armed incursions, bomb attacks, and acts of subversion and destabilisation.

Then Indonesian President Sukarno believed that the creation of the Federation of Malaysia was a thinly-veiled attempt by the British to maintain colonial rule behind the cloak of independence granted to its former colonial possessions in Southeast Asia.

This belief was especially cemented by the fact that Britain would continue to have military bases in Malaya and Singapore.

Indonesia launched a series of cross-border raids into Malaysian territory in early 1963, beginning with military attacks in Sabah and Sarawak. By 1964, it escalated into raids in Singapore and Peninsular Malaysia.

Indonesian army personnel infiltrated Singapore with instructions to destroy transportation and other links between the island and Johor. A wave of bombings was also unleashed on Singapore that culminated in the bombing of MacDonald House that left three dead and 33 injured.

Under the Emergency (Essential Powers) Act 1964, the Yang di-Pertuan Agong may make any regulations whatsoever which he considers necessary for:

Other special powers granted in the act include:

While the Confrontation formally ended with a peace treaty in August 1966, the Emergency (Essential Powers) Act 1964 was never actually repealed.

However, it ceased to have effect on 15 May 1969 after the proclamation of the Emergency (Essential Powers) Ordinance 1969.

The 13 May 1969 incident is well etched into the minds of Malaysians as one of the darkest days in Malaysian history.

Racial riots and violence broke out in Kuala Lumpur after the 1969 General Election which saw opposition parties making gains at the expense of the ruling Barisan Nasional coalition.

Official reports put the number of deaths due to the riots at 196, while Western diplomatic sources at the time suggested it was closer to 600.

In response, a state of emergency – via the Emergency (Essential Powers) Ordinance 1969 – was declared by the Yang di-Pertuan Agong on 15 May 1969 which led to the suspension of Parliament.

With no official elected government, the National Operations Council – or Majlis Gerakan Negara (MAGERAN) – was established as a caretaker government to temporarily govern the country for 18 months between 1969 to 1971.

Malaysia was placed under the charge of the Director of Operations, who was then Deputy Prime Minister Tun Abdul Razak.

What else happened during the 1969 Emergency:

Constitutional government was restored and Parliament reconvened on February 1971.

Even after things stabilised again, the Proclamation of Emergency and the Emergency Ordinance 1969 were not revoked for decades until 2013.

Its last use was in June 2011 to detain 6 members of Parti Sosialis Malaysia for their support for the Bersih 2.0 rally for electoral reform.

However, one thing is for sure: We don’t know what the potential 2020 emergency will look like, as it will be the nation’s first during a global pandemic.

Whatever it is, we hope it wont be as bad as the previous ones.