Luckily, a responsible group of Malaysians decided to do something about it. 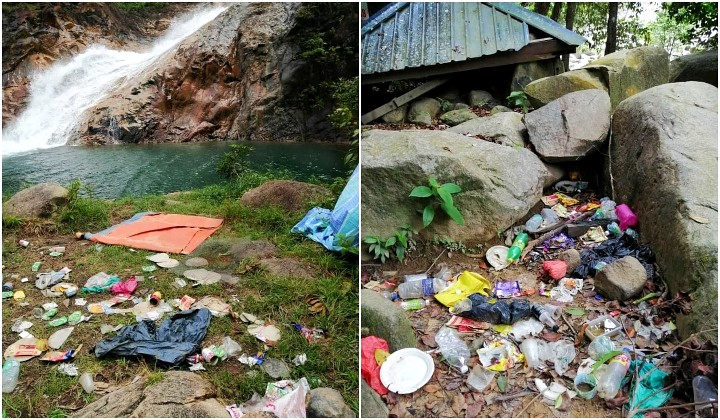 An appreciation for the environment is somewhat lacking in some people as Malaysians angrily found out when pictures of rubbish strewn around a popular Pahang waterfall went viral.

Facebook page KUANTAN revealed on Saturday, 26 September that irresponsible visitors to Berkelah Falls in Pahang had simply left behind an assortment of trash, including food packets, plastic bags, drink bottles and cans, and oddly enough – a fan cover.

The disgusting images quickly spread around the internet as Malaysians angrily criticised the lackadaisical attitude of the general public in caring for the environment, especially after holding camps or picnics at scenic spots.

Several commenters also pointed out the jarring difference of the state of our environment during the Movement Control Order (MCO) and after. Especially with previous reports of Malaysia’s rivers and marine ecosystems drastically improving and recovering due to the lack of human activity.

However, all hope is not lost as a response group took it upon themselves to clean up Berkelah Falls after seeing the viral images.

A local travel service provider, Jerangkang Trucks, set out on a mission to restore the beautiful picnic spot to its original beauty.

The group began their gotong-royong at 7pm, and carried on past midnight – picking up every piece of trash they spotted at the hiking trails and at all 7 of the cascading waterfalls.

Although we didn’t get enough sleep, we pushed forward with all our energy to clean up. We hope that its current cleanliness will last forever so that the next generation can also experience this beauty that we enjoy now.

To achieve this, just follow this popular saying the next time you go on a picnic or hike: “Take nothing but pictures and leave nothing but footprints.”