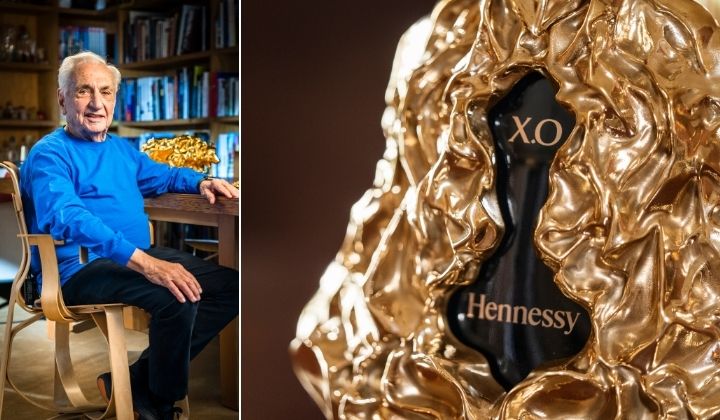 “Daunting” is not exactly the type of adjective you would expect legendary architect Frank Gehry to say about any of the design commissions he receives.

After all, this is the man who designed the famous Guggenheim Museum Bilbao and indirectly brought about the “Bilbao effect”. While many architects can claim that their works have transformed a city’s skyline, not all can confidently say they contributed to economic and cultural change in the cities where their designs stand.

So what is it about his latest work – creating a new celebratory bottle for Hennessy – that he found “daunting”?

A cognac itself is already a work of art

While I was excited, it was also daunting because a bottle of cognac is already a work of art, one you can smell, taste, and feel—it doesn’t need embellishment as it’s already there.

If a bottle of Hennessy X.O is already regarded as a multi-sensorial work of art, what more one that is specially crafted for its 150th anniversary?

Gehry said he remembers feeling excited, yet a little worried as this may be one of the most challenging tasks he picked up. Because how does one craft a bottle that conveys the rich history and commitment put in by master artisans of one of the most prominent cognac houses in the world?

Drawing inspiration from where it all started

Every piece of art tells a story – and how do you start telling a 150-year story if not from its beginning?

For that, Gehry travelled to the Hennessy Maison in France to experience the story of the cognac’s creation. He also spoke to the craftsmen who are responsible for the famous blend.

I wanted to bring it to life, and so I took inspiration from its birthplace and used this crumpling effect of the material that gives it a feeling of movement.

After learning the business of making eaux-de-vie (French for “distilled spirits”), Richard Hennessy set his eyes on the banks of River Charante to start Hennessy Maison.

It was not a smooth sail throughout, but with perseverance both founder and master blenders perfected the blend that created the Hennessy X.O that we know today. This is a blend that first greets its taster with sweet notes reminiscent of candied fruits, before slowly giving way to a rising and flowing flame that speaks of the cognac’s immense roundness, gradually ending with a spicy dark chocolate finale.

A bottle that tells a story

These were all the elements of inspiration that aided Gehry in his project – and the result was a stunning, luxurious work of art.

The 150th Anniversary Limited Edition Hennessy X.O is a bottle fitted in a 24-carat gold-dipped bronze sleeve, with crinkled structure that symbolises the running waters of the River Charante. It also comes with a luminous fusil that reflects the Hennessy cellar master’s ritual to extract extra old cognac. All these are packed in a compressed cardboard, imprinted with Gehry’s signature, which pays homage to the corrugated cardboard furniture that the architect designed back in the 70s.

The materials I’ve chosen catch the light and make this a really beautiful object on its own.

A celebration of courage

The limited edition bottle was revealed in a livestreamed event broadcasted from Charente in France, ushered in by a daytime fireworks display created by renowned artist Cai Guo-Qiang.

Titled “The Birth Of A Tragedy”, Cai’s artistic fireworks display seeks to celebrate the trials, tribulations, as well as the little victories that recent world events have brought on. Malaysians can rewatch this on Hennessy Malaysia’s Facebook page as well.

Just as how Richard Hennessy ventured to strange territories and crafted a lasting legacy for his eaux-de-vie, so will all of us as we pull through these tough times together with boldness.

This article was brought to life by Hennessy. Learn more about their 150th Anniversary Limited Edition bottles here.