That’s why wedding vows say “in sickness and in health”. 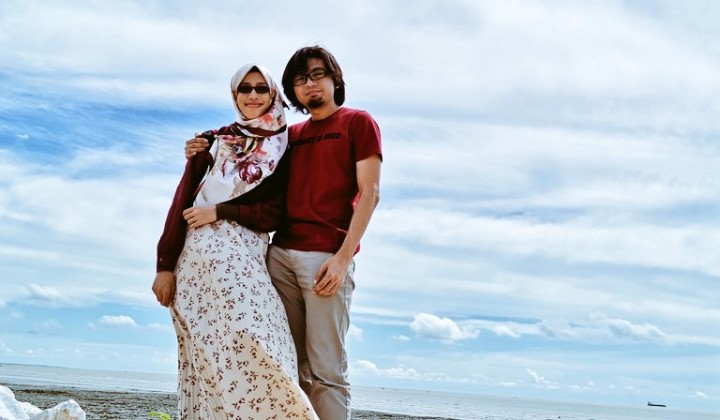 Romantic partnerships can be challenging even under the best of circumstances. Add a mental illness into that mix, and most people will tell you that your relationship is destined to fail.

But, what if you add two?

There’s nothing peculiar about two mental illness patients being together as partners and it’s possible.

Faris has been living with schizoaffectove disorder since he was a teenager.

I was initially diagnosed with bipolar type 1 by a psychiatrist in Hospital Serdang. In 2017, my diagnosis changed to schizoaffective disorder after consulting with a clinical psychologist.

To put it simply, schizoeffective disorder is a mental health disorder marked by a combination of schizophrenia symptoms, like hallucinations or delusions, and mood disorder symptoms, like depression or mania.

My wife was a committee member of a mental health program and she needed to make a booklet. So, she went online and the descriptions of the symptoms made her realise that she had depression. She then went to the hospital to seek help.

Major depressive disorder or clinical depression is a mood disorder that causes a persistent feeling of sadness and loss of interest. It affects how you feel, think and behave and can lead to a variety of emotional and physical problems.

As fate would have it, they were both diagnosed in the same year, 2016. Albeit, separately.

Jehaada is among the few lucky ones. She identified and understood her symptoms due to her involvement in a mental health awareness campaign.

Most people, like Faris, only realise they’re sick when they hit rock bottom. He told TRP that he went through a full blown psychosis episode before realising that he was sick and needed some help.

I was ‘riding a roller-coaster’ when I was in college. I didn’t know that I was sick until I hit a full blown psychosis where I thought everybody hated me. That’s when my friend brought me to see a doctor.

Even then, it took doctors another year to correctly diagnose Faris with schizoaffective disorder.

In 2017, the couple met on Facebook and connected over their shared struggle for mental health.

Faris shared that Jehaada commented on his post about his illness. Initially, he wasn’t interested. But then, one day he happened to come across an article about a girl who struggled with her depression but lived to tell her story. He saw the writer’s name in the byline, it was Jehaada.

Courage was all I saw in her so I braced myself to get to know her. After she returned to Malaysia from Yarmouk University, Jordan, we went to see each other accompanied by friends.

Eight months later, they decided to tie the knot.

When asked how the other partner reacted when finding out about about the other’s mental illness, Faris said that their shared experiences was what lead them to decide to get married.

It’s not really a surprise. People suffering from mental illness often feel misunderstood. Trying to relate to someone you love who has a mental illness can also be difficult and frustrating.

Here we are now. Two years and a half of happy marriage.

According to Faris, both he and Jehaada took their relationship seriously and made the effort to prepare each other before they decided to marry. They made it a point to ask each other all the serious and difficult questions.

Faris swears that their relationship isn’t much different from any other relationship, citing communication as an essential part of making their marriage work.

Aside from being open about their own likes and dislikes, Faris said they also communicated their “triggers” and how they prefer to be assisted if and when they experience a relapse.

Be transparent. No lies, no cover ups, no nothing. For example, she asked me the definition of marriage, the role of a husband, polygamy, children, life goals, and so much more.

A trigger is something that sets off a memory tape, or flashback, transporting a person back to the event of his/her original trauma. Triggers can be anything and are very personal, meaning different things trigger different people.

For Faris, he said he prefers space and time alone with his thoughts when he’s experiencing an episode. He said Jehaada respects his needs and will give him all the space he needs, waiting patiently for him to look for her again when he’s ready.

He admits that sometimes his illness might cause him to say something insensitive to her out of impulse. He’s so grateful that she can acknowledge that those words aren’t coming from him.

On the flip side, Jehaada needs a consoling partner when she’s upset. Faris shares that his sweet wife likes being cuddled and kissed when she cries, and a patient ear that can listen to her while she expresses her feelings.

I would take her out and spend some quality time with her. Having Llao Llao together, that’s her favourite.

As someone with major depressive disorder myself, engaged to an amazing man who happens to have bipolar 2 disorder, Faris and Jehaada’s success story gives me hope.

It’s so reassuring to know that regardless of the difficulties my partner and I may face in our relationship, it’s not impossible for two mental illness patients to be together and to be happy.