Have you ever noticed how a city’s architecture somehow seems to have a voice of its own? 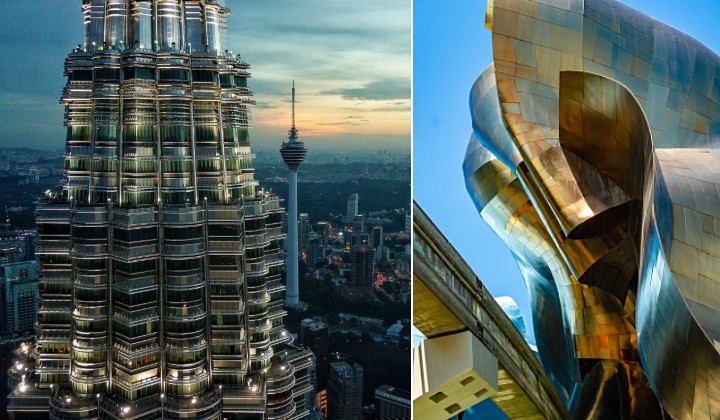 Think of any metropolitan city in the world, and the first image that comes to mind is usually a defining display of architecture – buildings that clearly mark the identity of the place.

The preeminent architect of modern times, Frank Gehry once said: “Architecture should speak of its time and place, but yearn for timelessness.”

For Malaysia, and Kuala Lumpur, nothing is more representative of this than the Petronas Twin Towers – or as locals call it the Jagung, or Rocket Twin Towers.

That unique Rub El Hizb eight-pointed star when viewed from the top with interior motifs that reflect Malaysian local handicrafts and weaving patterns has made it such an icon that literally put Malaysia on the architectural map.

Because in theory, the traditional designs should make things seem a bit old but the clever use of stainless steel and glass finishing made the building truly stunning.

This material choice was actually in line with the global architectural theme going on at the time, where uniquely designed stainless steel architectural wonders spurred the rapid transformation of their homes.

Award-winning American architect Frank Gehry was particularly known for being especially good at this since the late 80s with his jaw-dropping works of metal-bending.

I was playing with things that were normal to culture, like corrugated metal—things like that were being done in various ways in the community that were not liked.

For instance, his Neuer Zollhof complex in Dusseldorf, Germany spurred the transformation of the waterfront into what is now called the Media Harbour in 1999.

While the Walt Disney Concert Hall in Los Angeles exudes a presence and a sense of uniqueness that gives everyone else an excitement as they identify with it, and now a regularly feature in pop culture references to Tinseltown.

But his most recognised work is perhaps the finest illustration of how an architect can quite literally transform a place.

The Pritzker Prize–winning architect’s iconic swirls of stone, glass, and titanium for the Guggenheim Museum Bilbao not only changed the way that architects and people think about museums, but also boosted Bilbao’s economy with its astounding success almost immediately upon opening in 1997.

It’s not new that architecture can profoundly affect a place, sometimes transform it. Architecture and any art can transform a person, even save someone.

ArchDaily notes that‬ ‬the phenomenon of a city‮’‬s transformation following the construction of a significant piece of architecture is now referred to as the‭ ‬‮“‬Bilbao Effect‭.‬‮”‬‭

This “Bilbao Effect” where a building brings economic prosperity to a place was also seen in Ipoh back in 1917 with the completion of the grand Ipoh Railway Station.

The colonial era structure also known as the “Taj Mahal of Malaysia” featured a fascinating mix of Moorish, Mughal and late-Edwardian Baroque architecture.

What’s more it wasn’t merely a functional building, but also an important status symbol of status and development during the peak of tin mining in 20th century Malaya where the railway system was a vital artery in transporting goods around the Peninsular.

The double-storey station housed the regal 17-bedroom Majestic hotel which boasted a restaurant and a bar, also fetched a particularly exclusive clientele of the wealthy upper class and, later on, tourists.

It was even once used as a shooting location for the 1999 Hollywood film Anna and the King, starring Jodie Foster and Chow Yun-fat.

But despite the building’s historical wealth, it has remained effortlessly relevant today as it was 80 years ago, continuously drawing in onlookers keen to take in its breathless beauty.

Well, as Gehry puts it:

Architecture has always been a very idealistic profession. It’s about making the world a better place, and it works over the generations because people go on vacation and they look for it.

This, is perhaps the most alluring appeal of architecture.

So, the next time you visit a new place, listen to what the buildings are saying – you never know what secrets they have to share!

The Pekan, The Square & The Heart Of The Community