Dr Syed Faisal Taha described the outbreak as a war with a very witty entity. 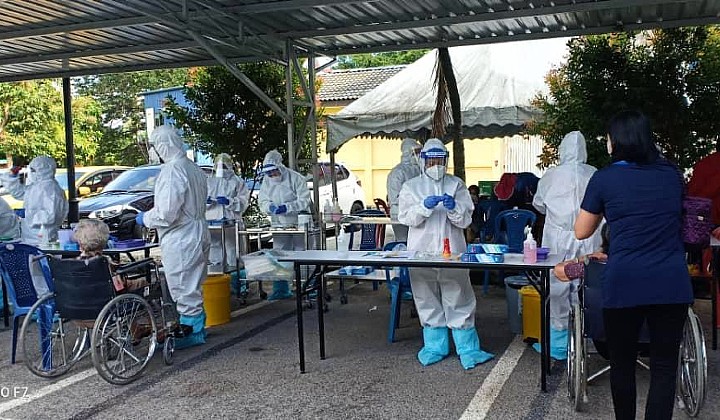 When it was revealed earlier in September that a new Covid-19 cluster was detected in a medical centre involving healthcare workers, it was a nightmare come true.

Triggered by symptomatic staff who had no idea they were infected by the coronavirus, Sungai Cluster broke loose in Kedah Medical Centre and quickly became one of the more severe clusters in Malaysia with a high number of patients admitted into the Intensive Care Unit (ICU).

Like we said, it’s a nightmare come true – and a doctor at the Kedah Medical Centre reveals the scary moments when the virus broke loose at the hospital.

In a powerful post shared on Facebook,  Consultant Physician & Nephrologist at Kedah Medical Centre Dr Syed Faisal Taha described the outbreak as a war with a very witty entity.

I was speechless, dumbfounded, looking straight ahead at the wrecking ball that was coming for us. We had become an epicenter of a healthcare worker outbreak that was so unprecedented totally putting us on the map overnight.

He revealed that the index patient (Case 9,445) was a house staff nurse stationed in the operation theatre who asked “Doctor, why is it that I feel I have lost any sense of taste tonight?”, but did not have any respiratory symptoms.

The doctor, who helmed the hospital’s infection control committee, suspected that something sinister could be afoot, but did not think that her Covid-19 test would come back positive.

The hospital had been stringent in protecting their patients and staff, following the health standard operating procedures (SOP) to a tee.

All admissions, symptomatic or asymptomatic, must undergo a Covid-19 antigen nasal swab.

Patients were held at the casualty area and not allowed into the centre for an hour while waiting for the results to come back, anyone with a fever was blacklisted and mandatory antibody testing was done for all admissions to determine if there was any recent exposure.

A bomb was ticking and we had to ensure no outsiders would be allowed into our compound to detonate it.

But as it turns out, the enemy was already within the fortress. The nurse’s test results came back heavily positive.

Then, another staff nurse with a fever and dry cough also tested positive the same night.

Our hospital was undoubtedly poising for a nightmare, when we had also confirmed a second case within the same night. We summoned the nurse and her antigen swab test was also heavily positive!  By then, it was just after midnight, about the same time when the Titanic collided with the iceberg. All hands on deck, alarm bells began to ring.

The hospital essentially screeched to a halt with only the emergency theatre allowed to operate.

All operation theater personnel were quarantined and tested but when one personnel who was actually on leave came in with a raging fever and positive results, it was clear that the entire hospital -down to the last patient- had to be tested.

Obviously the virus that we were at war with knew no mercy the moment it breached us. I was almost going into a convulsion when the report came back, out of 49 OT personnel screened, 18 of them turned out to be positive!

But the final blow came when it turned out that a key hospital  personnel containing the infection wound up being infected as well and the entire team had to be quarantined.

It was a nasty war that the doctor harkened to Normandy Landings in France during World War II as the team preservered to battle the virus that had infiltrated their fort – and it worked.

In the beginning they felt that they were losing the battle, so did we. However because we persevered, we managed to turn the tables. Finally all the PCR results came back indicating the outbreak was only contained just within the operation theatre community.

Within a week, the Covid-19 outbreak in the hospital was contained.

The hospital was temporarily shut down for three days to facilitate thorough cleaning and disinfection of their premises, surface swabs were taken and the hospital consultants were screened twice for the virus.

From this entire experience, Dr Syed Faisal emphasised how crucial it is to wear a face mask and observe the social distancing at all times, so long as a viable vaccine is absent.

He also pointed out that there is a dire need to shift more focus towards healthcare workers as current SOPs are more patient-centric.

Our SOP towards the patients were already well in place but we could have underplayed the attention to our own health care workers. They must be sincere in admitting their symptoms at the earliest possible time. Be it, even if there is only some lingering sore throat they must be evaluated. We had already seen enough repercussions if they didn’t. We must have a lower threshold to screen health care workers with the PCR swabs.

And the good doctor is right.

According to the latest data by the Health Ministry, the Sungai cluster has spread to a fourth generation of infection with a total of 73 infections across three states.

The war isn’t over yet.