The Iban warrior who defeated the communists. 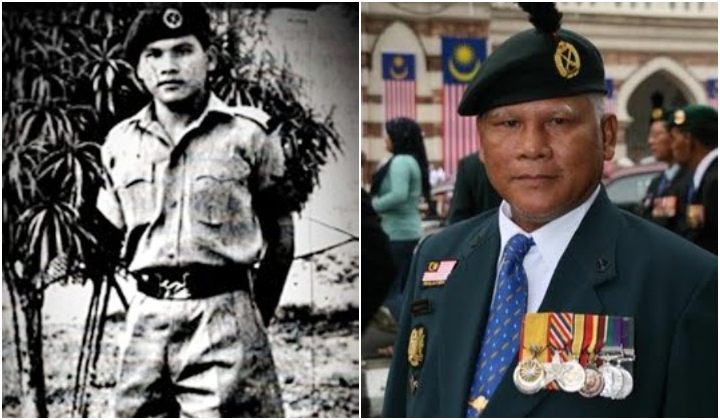 Awhile back, we wrote an article about the three national honorary awards that are actually higher than a Tun-ship, yet don’t carry any titles.

In the article, we gave a couple of examples of prominent individuals who were conferred these awards. A TRP reader kindly pointed out that we had unfortunately left out a prominent Malaysian figure.

In fact, this Malaysian figure is so prominent, a movie has been made about him.

Datuk Temenggung Kanang Anak Langkau was a member of the Iban Dayak community in Sarawak. He is also the most decorated war hero and soldier in the annals of Malaysian Military History.

Kanang is the only person to have ever been awarded both the Star of the Commander of Valour (Panglima Gagah Berani) and Grand Knight of Valour (Seri Pahlawan Gagah Perkasa) gallantry awards. On top of that, he is one of the very few people who received the awards whilst still being alive.

Kanang was born on 2 March 1945 in Julau, Sarawak. Being the grandson of an Iban tribe headsman, he grew up learning critical tracking skills for hunting in the rainforest. He was also taught how to read plants, animal noises, identify smells, and other skills.

It became a colonial unit under the British army before being absorbed into the Malaysian Army upon the formation of Malaysia in 1963 and renamed as the Royal Ranger Regiment.

During his years in training, Kanang attended the Jungle Warfare School in Ulu Tiram, Johor and was also taught by the Gurkha soldiers in Singapore. Meanwhile, attached to the Ranger’s 8th battalion, he served during both the Brunei Revolt and Indonesian Confrontation – rebel movements in the 1960s that opposed the formation of the Malaysian Federation.

However, Kanang’s most recognised feat was while fighting communist insurgents in Perak in the 1980s.

On 1 June 1979, at Fort Legap in Ipoh, Perak, Kanang’s unit pursued a small group of guerillas from the Communist Party of Malaya during an armed operation.

During this operation, they found the communists temporary camp and launched an attack. Two Royal Regiment Rangers died in the ensuing firefight, but they also managed to take down five enemies on that day.

Later on 8 February 1980, the guerillas avenged their loss by launching their own attack in Tanah Hitam, Ipoh. A young private from the 25th battalion of the Royal Malay Regiment stationed there had just finished his sentry duty when the communists attacked. Private Abu Abd Rahman died from a gunshot wound to the head that day.

In response to the insurgents attack, the Royal Ranger Regiment launched Operation Dragnet. Kanang’s platoon under the command of 1st Lieutenant Johnson Anak Meling was deployed to destroy the communists who had attacked at Tanah Hitam.

Kanang, leading the unit alongside platoon colleague Corporal Nasir Nordin, followed the trails left by the guerillas for 11 days. Along the way, they found abandoned campsites, avoided booby traps set in the rainforest, and kept searching for what they assumed was a group of about a dozen insurgents.

Finally, in the late afternoon of 19 February 1980, Kanang and Nasir were leading the platoon around a hill when they came across a communication cord. The location of the cord led Kanang to estimate that their enemy’s camp was probably nearby.

This communication cord is usually a wire attached to a small bush or empty cans which make noise when pulled. It is used by the sentry to alert the main camp when an enemy approaches.

However, what Kanang didn’t realise was that they had actually walked right into enemy territory. Within minutes of picking up the wire cord, Kanang and his unit found themselves surrounded by more than 20 insurgents.

There are a few versions on how the ensuing firefight enfolded, but common iterations of the story say that that insurgents opened fire at Kanang’s unit and Nasir was shot.

Despite bullets coming from all directions and while being obviously outnumbered, Kanang was determined to rescue his fallen colleague. As he leaped to save Nasir, Kanang was shot three times. But did not retreat.

Instead, he rallied the rest of his troops by constantly shouting “Agi idup agi ngelaban!”. The famous Iban war cry by the legendary Iban warrior Rentap which means “still alive, still fighting!”

With his fierce determination, Kanang’s platoon pushed back against the insurgents until they retreated. The platoon sustained five injured men, but thankfully, no fatalities. Kanang was extracted from the battlefield by medics and sent to the Ipoh Hospital by helicopter.

Loyal to the military until 1983

Kanang fought to stay alive and reportedly slipped between life and death for days in a coma. After a year, Kanang was back on his feet again and continued to serve in the military until 1983.

What became of the insurgents is unknown, but Operation Dragnet was shut down soon after the firefight. By 1989, the Hat Yai Peace Agreement was signed between the Malayan Communist Party and the Malaysian government, ending the official presence of communism in the country.

After 21 years of service, Kanang retired from the Military as a First Warrant Officer. Sarawak acknowledged Kanang’s contribution to the country by giving him the title of Temenggong of the Iban community in the Sri Aman district.

In 2011, he received another award by the Sarawakian government, this time a Datuk-ship from the then head of state, Tun Abang Muhammad Salahuddin Abang Barieng.

A book entitled Kanang, The Story of a Hero was also written about him and his service in the military force. Malaysians who attended public secondary school might be familiar with this book which was used as a literature textbook as well.

Kanang was 68 years old when he passed away on 3 January 2013 from a heart attack. He was laid to rest in full military honour at the Heroes’ Grave in Kuching. He is survived by his wife, Datin Brawang Chunggat and his six children.

May his bravery, sacrifice and contribution to the country never be forgotten.