Zeem Ahmad has represented Malaysia in the incredible sport on the international stage many times. 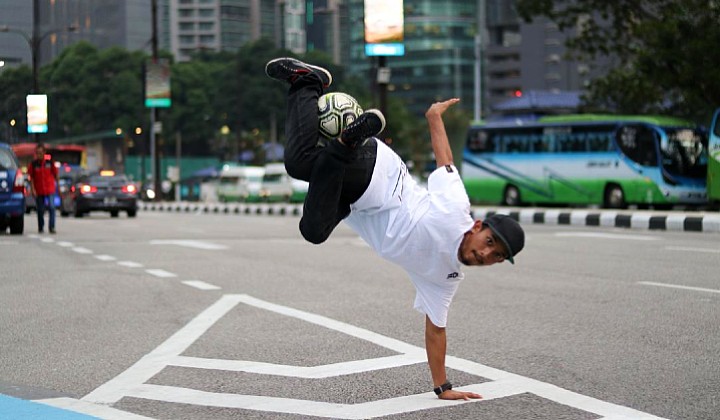 The sight of someone deftly juggling a football with their feet while performing impressive acrobatics is probably something you’d expect to witness on the streets of Brazil.

Well, here’s a surprise for you – the much overlooked sport of freestyle football, sometimes called panna, has definitely been lighting up the streets of Malaysia!

Meet Muhamad Hazim bin Ahmad, aka Zeem Ahmad, an incredibly skilled Malaysian freestyle footballer who’s been making a name for himself overseas, but no one’s really heard of him here.

The 25-year-old freestyle footballer actually has quite a number of international fans. He is one of the few Asian faces at the 2016 World Street Soccer championship in Denmark.

He also represented Malaysia in Japan for the Panna Home Training Camp 2019 as a trainer for an international mix of budding freestylers.

Zeem tells TRP that he’s actually been to 8 countries to showcase his acrobatic footwork – including Vietnam, The Netherlands, Singapore, Czech Republic and Germany. He’s also amassed quite the international following for his skills.

So what is freestyle football?

It’s hard to pin down what exactly is freestyle football, but it is both a sport and an art form which combines acrobatics, dexterity, music and of course, football tricks. It was made immensely popular by footballing legends Maradona and Ronaldinho in the 80s and 2000s.

In Malaysia, the sport-meets-art form has a close-knit group of dedicated performers who organise street shows, big performances and events.

It was through this grassroots effort that a 10-year-old Zeem got acquainted with freestyle football.

In 2006, I was actually on a family outing in Tasik Titiwangsa when I came across a freestyle performance. My brother and I were quite curious and it was amazing watching them do their tricks.

He began catching more and more street performances before seeking training for Dr. Freestyler Malaysia (Amy), one of the sport’s pioneers in Malaysia.

It took 4 years of intense training from Amy to master the basics of freestyle football before the young man began experimenting with his own moves – which paid off as evidenced by his international following.

But it hasn’t all been smooth sailing.

Zeem says that the sport isn’t officially recognised, so they usually face difficulties in finding sponsors or raising funds to participate in international shows and competitions.

But what to do? I just do shows, performances, events and even teach young people for a small fee. The money we make from these activities are used to travel abroad and compete for Malaysia.

There is some good news though.

His jaw-dropping antics have actually begun making waves online locally when the 25-year-old shared a clip of his freestyling aboard the LRT on Twitter.

The 30-second clip posted on 1st September has amassed over 11,000 likes and retweets with several impressed Malaysians leaving supportive comments.

Zeem says that he’s quite pleased about that as he’s long been trying to get Malaysians interested in the sport.

Actually, my videos have gone viral before in the past. But it’s mostly people overseas who know who I am. But this is good, because usually in Malaysia, it takes going viral for something to be noticed.

With this newfound popularity, Zeem is spurred to quickly realise his vision to set up a freestyle football academy to train young kids.

He says he’s still looking for a location, and hopefully some sponsors, as the talented Malaysian is determined to pass his skills to a budding new generation.

I am often invited to teach freestyle football in Japan, but now I want to focus on young people in Malaysia. It’s a great opportunity for kids who aren’t academically inclined, but have great talent, because I believe that success can be found anywhere as long as you put in the work.