Fern Chua has long been at the forefront of modernising Malaysian batik. Now, she’s showing that to the world. 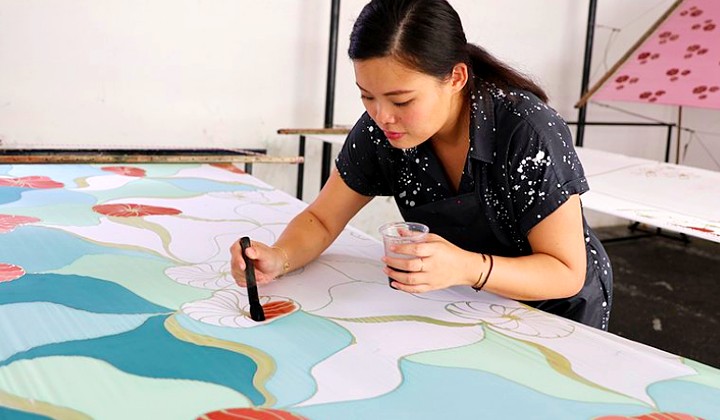 Celebrated Malaysian batik designer Fern Chua of FERN Batik has been featured in British Council’s ‘Crafting Futures‘ global campaign that aims to celebrate the value of craft in history, culture and the world today by bringing together craft practitioners, designers and organisations from around the world.

Fern, who has been on the forefront of modernising Malaysian batik since 2015, is among 6 artists from around the globe to participate in this initiative to represent Malaysia’s batik heritage.

It is truly a great honour and a proud achievement to be recognised, and to represent Malaysia, in my craft in batik – to have this great opportunity to promote Malaysia’s culture and heritage through this local art form.

As part of this ‘Crafting Futures’ campaign, a film series called ‘Why I Make’ is also premiered where the artists open up their studios to let the world witness the breathtaking craftsmanship that goes into their work.

In this 3-minute film, Fern reveals that she began diving into the world of batik after a car accident 10 years ago left her with severe injuries to her hands.

The doctor advised her to pick up an activity that would let her rehabilitate the movement of her hands, and that was when she stumbled upon the art of making batik.

That was when she discovered an affinity for the craft and was determined to help break the perception that batik was strictly traditional.

Batik has different meanings and perception to different people. This can sometimes also create stigmas which leads to a never-ending debate and critiques. To break out of that, I always feel that art itself should not be confined to what is black and white. I choose to stick to my own beliefs – preserving the craft while modernising the design based on my own inspiration.

And so, she started her own batik brand and began making contemporary new patterns and designs that was quite a departure from what was considered typical batik styles.

For instance, her latest FERN Batik collection called the Moroccan Series, is themed around, well, Morocco.

The collection is resplendent with abstract designs, batik blockwork and new colour tones that are reminiscent of beautiful Moorish tile patterns, the Great Sahara desert, Moroccan flora. It’s fun and different, but most importantly, comfortable.

So, it comes to no surprise that the talented Malaysian became among the few selected globally to present Malaysian batik in a new light in the ‘Crafting Futures’ initiative.

With this feather in her cap, Fern hopes that this can potentially open doors for craft artists in future generations, because for her, “batik is more than a heritage, it is an art form.”

Watch Fern share her journey in the ‘Why I Make’ short film below: