The grief-stricken elephant was even trying to shake her baby awake. 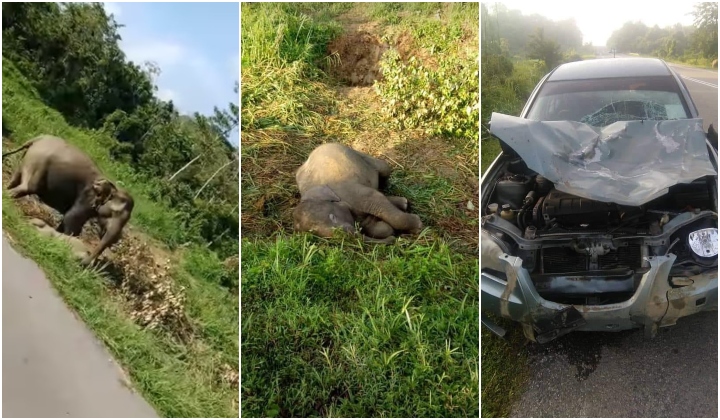 In another tragic loss of Malaysia’s wildlife, a baby elephant in  Mersing, Johor has died after it was hit by a car. But what was most heartbreaking, is its grieving mother that absolutely refused to leave her baby’s side.

A post on the Info Roadblock JPJ Facebook page states that a car had hit a baby elephant on 1st September along Jalan Mawai, towards Mersing, Johor.

Several videos shared across social media show a mother elephant standing by her dead calf and trying to rouse it back to life as several passers-by watch the heart-wrenching scene unfold.

A passerby said he was shocked to see an elephant by the side of the road, but soon realised the dead calf by its feet.

One video showed the grief-stricken elephant trying to shake her baby awake as gunshots rang through the air, apparently in an attempt to chase her away.

Grieving for the dead

While most animals do not show great interest in the bodies of their dead, elephants are one of the rare few creatures that actually mourn after one of their herd passes on.

One article describes that when elephants are with the dead body of a loved one, they extend their trunks and touch the body gently- even running their trunk tips along the lower jaw, tusks and teeth – which are parts most touched during greetings.

It is their silence that is most unsettling. The only sound is the slow blowing of air out of their trunks as they investigate their dead companion. It’s as if even the birds have stopped singing.

Not much is known about how and why elephants grieve, but conservation biologist George Wittemyer tells National Geographic that it is a “striking behaviour- not based on survival or necessity, but based on some sort of emotion.”

So if you’re driving in the dark or on a road next to a forest and come across wildlife, you can prevent a tragedy by following the steps below: