Family for life and past death. 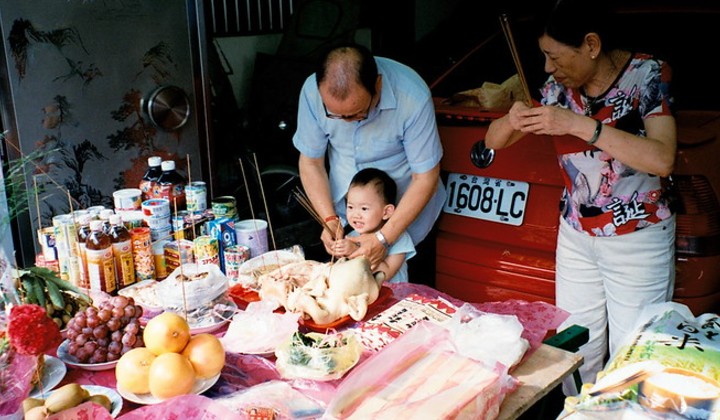 Around this time, you might see offerings of food left on the streets or at front gates. Some of your friends might even caution against spending too much time outside, claiming that ghosts might come and catch you!

During the Hungry Ghost Month, which falls on the seventh month in the lunar calendar, it is said that the Gates of Hell open and deceased spirits who are not at rest make a pilgrimage into the world of the living. This is a belief popular in traditional Chinese folk religion and Taoism.

The Hungry Ghost Month tends to inspire fear. After all, the Gates of Hell opening and disturbed spirits are not comforting thoughts. However, the true legends behind the Hungry Ghosts aren’t about vengeance; it’s about family.

Maudgalyayana (also known as Mulian) is one of Buddha’s Ten Great Disciples, according to Buddhism. In one story, he saved his mother’s spirit from Hell, leading to the opening of the Gates of Hell to allow her to leave.

Mulian’s mother often wasted food, so when she passed away, her spirit turned into a hungry ghost trapped in Hell. Mulian, a great Buddhist disciple, wanted to save her soul from such a place, and resolved to get her out. Thus, he journeyed into the depths of Hell, past all the different levels of suffering, and found his mother’s spirit in perpetual hunger, unable to eat yet tormented by scrumptious food.

After begging with Buddha, Mulian was given one chance to save her: on the fifteenth day of the seventh month of the lunar calendar, the hungry ghosts will be reassessed. If they receive enough positive karma, then they may leave Hell and be reincarnated.

As such, he and his own disciples prayed tirelessly for her, passing on their karma to Mulian’s mother. Ultimately, she received so much positive karma that she was allowed to depart from being a hungry ghost.

This act of passing on positive karma to save his mother from hell turned into a classic story, passed down in religion and folklore, as Mulian’s greatest act of love and respect to his mother.

The Core of The Hungry Ghost Festival Is Filial Piety

While people are urged to stay indoors over fears of malevolent spirits, that’s not actually the core meaning of the Hungry Ghost Festival.

Instead, the festival is actually a time to honour your ancestors and ‘welcome’ them during their time back in the living world. Basically, the opening of the Gates of Hell are kind of like a holiday for spirits!

Festivals are held for spirits, not people. That’s why you might witness stage performances where there are empty seats in the front rows, or large platters of food that no one eats. While it might seem odd, those are offerings left out for spirits to enjoy during their visit, especially those that may not have family homes to return to.

It is said that spirits often go home to see their families, which is why some people leave portions of food at the doorstep of their houses, so that visiting spirits will be treated respectful with offerings.

However, these offerings should still be treated with respect and should not be messed with, which is why restraint and respectful behaviour is encouraged instead.

During this time, families are encouraged to pray and pay their respects to their ancestors, to return positive karma to those who have to stay in Hell. Everything else, such as the food and the performances, are only examples of filial piety.

During the Hungry Ghost Month, the hungry ghosts aren’t out to steal our souls, though it certainly makes for a more exciting urban legend. These ghosts are simply back to see their families. So take care during this month: after all, you might just have an ancestor coming by to pay you a visit.

Should You Be Afraid Of Or Celebrate The Hungry Ghost Festival?

There’s More To The Humble Durian Than A Roadside Feast