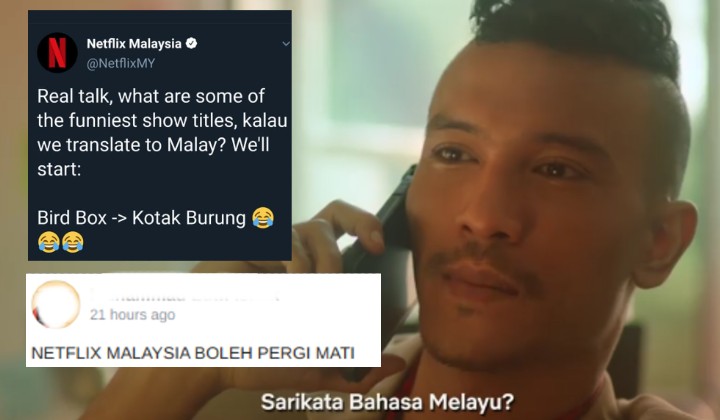 Recently, Netflix Malaysia caused a minor commotion when they asked Malaysians for the funniest show titles if they were translated to Malay. The simple question sparked a stronger response than anyone expected.

Real talk, what are some of the funniest show titles, kalau we translate to Malay? We'll start:

Most netizens responded with funny translations of their own, with localized Malaysian slang.

However, other netizens found offense at Netflix’s tweet, claiming that it was making fun of the Malay language.

Why are you making fun of bahasa Kebangsaan?

Some netizens even showed their anger by cancelling their Netflix subscription, claiming that they cannot support a company that encourages making fun of the national language.

While Netflix may have lost (one) subscriber(s), they stand to gain many more, because it turns out that the online video streaming company asked for Malay movie titles to prepare Malaysians for the release of Malay-language Netflix, which is probably the exact opposite of “disrespecting” the national language!

They had invited top personalities in Malaysia to aid them in translating Netflix into the Malay-language, from its user interface to subtitles in all their top shows!

Local interpreter Fariz and his crack team featuring Dato’ Awie, Ella Aminuddin, Altimet, Zamaera, and Zee Avi were on the job to spin Netflix to be more Malay-friendly, so you can watch popular TV shows like Umbrella Academy and Stranger Things with native Malay subtitles without worrying about incomprehensible gibberish ruining your Netflix experience.

In fact, the Malay language option is already available on your Netflix account. Just sign in to your profile on your desktop to find out more.