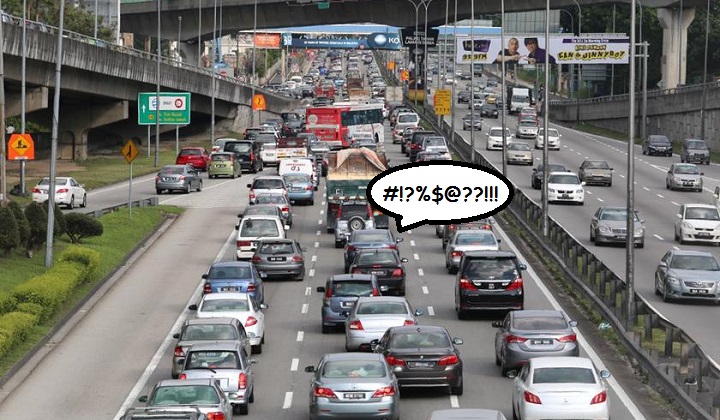 Every Malaysian knows just how much of a waste of time a traffic jam is, but it turns out that all that time sitting in the daily bumper-to-bumper traffic is really expensive – as in RM20 BILLION!

In other words, that’s RM10 million – RM20 billion every year!

The World Bank’s Malaysia Economic Monitor, June 2015 – Transforming Urban Transport also points out that only 17% of commuters in Kuala Lumpur use public transport compared to 62% in Singapore and 89% in Hong Kong.

The reason for all this horrible jam?

The report also points to a lack of unified planning as a key obstacle to the delivery of efficient urban transport.

Current planning and delivery practices for urban transport are still not sufficiently robust to handle the underlying complexity of Malaysia’s cities as they are scattered across a number of different entities.

And the problem is only getting worse

Economics expert Professor Nik Hashim Nik Mustapha states in the Journal of Traffic and Transportation Engineering that commuting traffic in the Federal Territory of Kuala Lumpur and the Klang Valley in general, are worsening every day despite efforts on speed-up fast lanes at the highway tolls.

In the paper, he said this is fuelled by the increasing urban population, higher per capita income and availability of credit for automobile purchases enable people to own cars.

In KL, there are an estimated two cars for each resident and even among the poorest 10% of households, about half owned a car as of 2012.

READ MORE: There Are Solutions For M’sia’s Slow Buses But We’re Not Doing Them

One important factor that can potentially contribute to improving socio-economic standing is access to transportation.

The article highlights that without reliable transportation, low-income urban households are at a disadvantage in accessing a wider range of opportunities – and this could potentially hinder them from moving up the socio-economic ladder.

So it looks like Malaysia is not only paying a heavy price for its traffic jams right now, but it’s also costing Malaysians their future.