What’s more amazing is that he learned AR development skills himself during MCO. 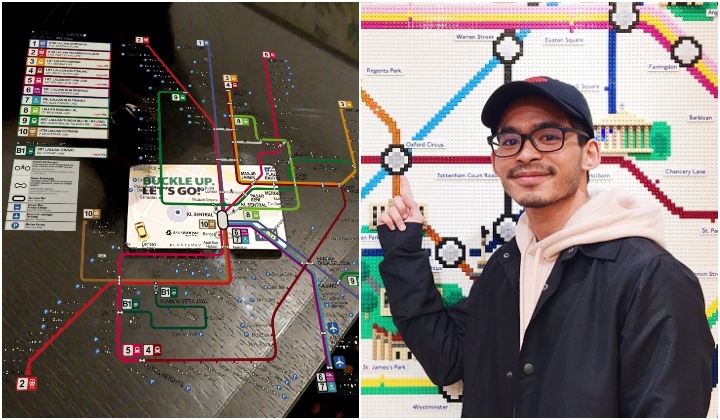 How many times have you fumbled on your phone on the train, frantically Googling the LRT Map on your commute? Or even stared at the station map on the platform trying to look for the right station?

Well, it happens way too often to Emil Shafy on his daily LRT commute to work. To solve this time consuming issue, the 24-year-old simply decided to build an augmented reality (AR) LRT map that appears on his Touch ‘n Go card.

That’s right, the young man with no professional training in AR development made his own tech feature on an everyday object.

Now working as a web developer, Emil admits that he did dabble in AR during his university days, but never took it further as AR technology was still in its early stages at that time.

But something changed during the Movement Control Order (MCO) in March.

Finding himself with ample time on his hands and not much to do, the curious chap dove into a world of AR research with courses, tutorials and documentation.

By the end of MCO, he has already made an AR Art portal using his brother’s artworks, inspired by the Stranger Things Upside Down portal.

When it was time to return to the office, Emil realised he now had the skill to solve an everyday commuting problem.

I happened to see AR featured on a business card on TikTok and I thought it would be cool to apply AR as a solution for a common problem. I wanted to create something new, interactive and easily accessible.

Also, considering that I am by no means an AR expert, I did encounter a few roadblocks while making this and I overcame this by looking up forums such as Reddit and Stackoverflow for solutions from people who came across similar problems.

Initially, however, Emil was quite hesitant about the usefulness of this feature, thinking that users can easily look up the map online or save it in their phones.

But with a little nudge of support and design help from his girlfriend, the self-taught AR developer slowly realised that this interactive approach was not only saving him time, but was also really really cool.

Anyway, he sure is glad he took a leap of faith because now LRT operator Prasarana is looking to work with the ingenious Malaysian!

You see, when Emil posted a short clip of his AR LRT map on Twitter, it got A LOT of attention – as in over 7.6K retweets and 10K likes.

Made an LRT map appear on my Touch N Go card in AR. Woohoo! still a bit buggy but helpful if we're ever lost pic.twitter.com/ynZKEaA4WQ

With all that online attention, the social media team at Prasarana couldn’t help but to notice the brilliance in this simple solution.

Right now, Emil tells TRP that things have not been finalized, but he is excited for the opportunity to potentially collaborate and work on this project with them.

As for what’s next, Emil says he has a couple of ideas in mind but wants to keep it as a surprise for now.

But he does have these words of wisdom to impart:

Even if you have the wackiest and simplest idea, that you think no one will take notice of, in every moment of doubt, try to find it within yourself to persevere and just take the leap of faith – and maybe while we’re at it, we can make life a little more fun.