Despite fighting valiantly for over a year, 23-year-old Phu Joon Meng has been advised to enjoy his remaining days. 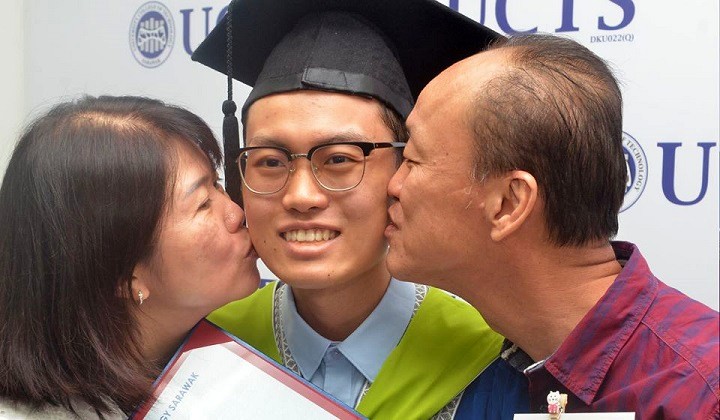 A Sarawak university has conferred a degree under special provisions to its student, 23-year-old Phu Joon Meng who had been battling cancer for over a year.

Phu will likely not have much time as he was diagnosed with a grade four malignant brain tumour in May 2019.

Though he fought valiantly for over a year, doctors advised that he stop treatment and enjoy his remaining days – which is exactly what he did, but with a determination to graduate.

According to The Borneo Post, the brave University College of Technology Sarawak (UCTS) student was conferred an aegrotat degree in Bachelors of Quantity Surveying on 18 August- a first in the institution’s 7-year history.

Ps: An aegrotat degree is a special provision given to a student taking examinations in respect of a final degree, diploma or certificate programme, and who had been absent through illness from one or more papers. The degree is awarded under the presumption that had the student completed the courses and exams, and would have satisfied the requirements to graduate.

UCTS vice chancellor Prof Datuk Dr Khairuddin Ab Hamid said that this particular case was special as Phu was extremely determined and committed to his education despite battling the life-threatening illness.

This special person who we are celebrating today, despite being very ill, he is very determined, worked extremely hard and was so committed towards his studies.

In fact, Phu even attended online lectures on his way to the hospital.

The active young man actually received the devastating news in his final semester of his degree.

A black belt Taekwondo instructor, Phu told New Sarawak Tribune that he used to feel dizzy and weak after training, but blamed it on overexertion until a wave of nausea and vomiting hit him out of the blue.

Told that he had a brain tumour, Phu put everything on hold and he had the tumour removed and underwent treatment at Sarawak General Hospital.

When I received the news from the doctor that something was growing in my brain, I felt my whole world had collapsed.

After 6 months, everything seemed to be going well and the determined lad resumed his studies in February this year.

But, the cancer cells had spread to the rest of his body.

This was when doctors told Phu that it was time to stop treatment, and focus on having quality of life, and to enjoy the time he has left.

Though his dream to finish his studies on time with the rest of his peers may never come true, Phu is grateful for the aegrotat degree.

Now, all he wants to do is to spend the rest of his life making beautiful memories with his family.