Previous recipients were Dante Lam for ‘Operation Red Sea’, Yue Song for ‘The Bodyguard’ and Jung Byung-gil on ‘The Villainess’. 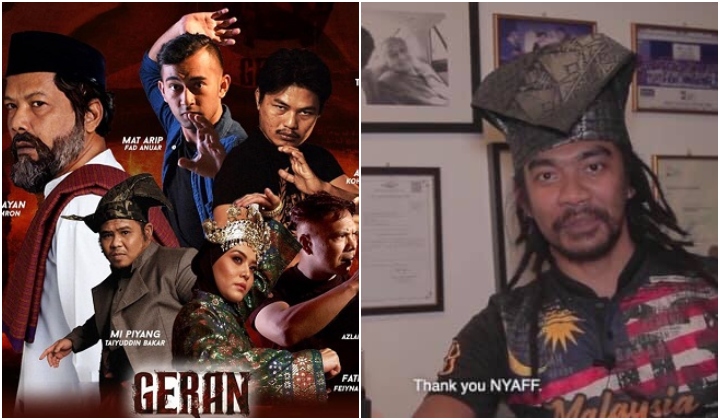 A Malaysian made martial arts action movie ‘Geran’ has won the prestigious Daniel A. Craft Award for Excellence in Action Cinema at the 2020 New York Asian Film Festival (NYAFF).

The official media of NYAFF easternkicks.com reported that this win means Geran director Areel Abu Bakar and action choreographer Azlan Komeng now join the ranks of outstanding past winners such as Dante Lam for ‘Operation Red Sea’, Yue Song for ‘The Bodyguard’ and Jung Byung-gil on ‘The Villainess’.

So what exactly is the martial art featured in the film?

Specifically, Silat Gayong Pusaka which was said to be created by Dato’ Meor Abdul Rahman in 1942 who fought off invading Japanese soldiers at Pulau Sudong.

In the film, two siblings in a Silat family are seeking their younger brother who fled with the land deed to bring him back to their father in order to defend their family legacy.

According to Bernama, the movie features real martial arts experts who choreographed their own stunts.

In fact, the use of silat in the film harkens the revival of silat on film with ‘Geran’ kickstarting interest both domestically and internationally- decades after its past glory in local films from the 1950s and 60s.

Director Areel Abu Bakar told easternkicks.com that he felt a responsibility to bring silat to the world as the platform to showcase the ancient martial art was so limited, even locally.

Geran was filmed using the producers’ own budget and released in Malaysia and Brunei on Oct 10, 2019.

At the film’s release, Areel told local movie blog Cinema Online that it took five years to complete the film because three years were spent on raising funds alone.

With the modest budget, never did he ever expect to receive such acclaim for his first movie!

But as the film exclaims on social media, it was all worth it in the end.

To watch ‘Geran’, it will be streamed online as part of the 19th New York Asian Film Festival via the Smart Cinema app from August 28 to September 12, 2020.