After educating special needs children, she can be spotted selling iced Milo around Subang Jaya schools in the afternoon. 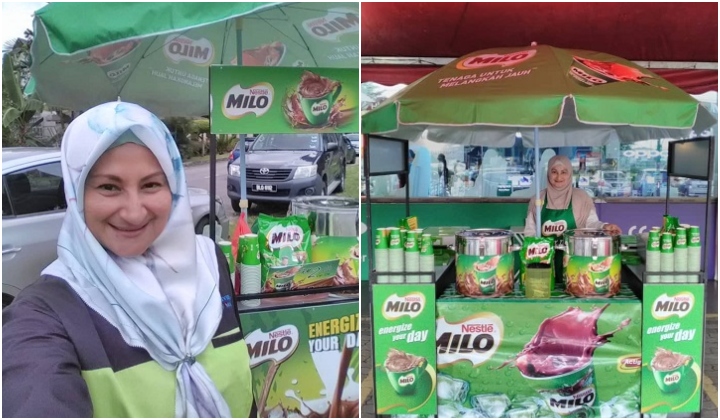 It’s not surprising to hear that 2020 has been a tough year for everyone, but the viral tale of a Montessori teacher in Subang Jaya who sells Milo drinks everyday after school to make ends meet, is a particularly sobering example.

In her post, she explained that the 53-year-old teacher, Shafinaz Melisa, decided to jump into the food and beverages (F&B) business when she realised her pay as a teacher was not sufficient to keep up with the rising cost of living.

She’s gone through so much as a woman and a single mother, and I’m so damn proud of her. She’s the strongest person I’ve ever met, and also the reason why I strive to be independent, mentally and financially. Thanks for teaching me valuable life lessons and self-worth Mama. ❤️

Speaking to TRP, Aminah says that her mother- who is also a single mother- had been teaching for 15 years and currently works in a school that specialises in special needs children.

Though Shafinaz finds it challenging to educate those who have difficulty in accomplishing simple tasks from buttoning their clothes or wearing their shoes, the dedicated teacher still finds satisfaction in seeing the progress that they make.

Her only lament is the lack of appreciation for the hard work put in by teachers.

If only the government would appreciate teachers more in this country because at the end of the day, we are the ones that cater to their kids’ learning foundation.

In fact, the teacher only takes home RM1,200 a month after EPF and SOCSO deductions – a figure that hovers on the minimum wage, but falls far below the RM2,700 living wage that Bank Negara estimated is sufficient for a single adult living in Kuala Lumpur.

While her tale garnered widespread well-wishes from Malaysians in awe of her hardworking spirit, Aminah stresses that her mother’s situation should not just serve as an inspiration, but also a wake up call on the systemic issue regarding the rising costs of living.

I support your mom’s effort! As long as its halal, insyallah Allah will pay nor give the best for her soon 💞

People like my mother should not have to be doing two jobs just to get by, it’s a growing problem in our country that needs to be talked about. She speaks for everyone who is going through these trying times.

According to the Statistics Department’s 2019 Household Income and Basic Amenities Survey Report and Household Expenditure Survey Report, the poverty line income for the average Malaysian household now stands at RM2,208 per month while the income gap has only worsened in the last five years.

Nonetheless, Shafinaz’s resourcefulness and hardworking nature is worthy of admiration, with Aminah also speaking highly of her.

The appreciative daughter says Shafinaz is strongest person she’s ever met, fiercely independent and dauntless in the face of obstacles.

On her own, she came up with solutions to her problems. So just imagine, me as a child, seeing all that power someone has to pick themselves up when life throws stuff in their face. I was clearly inspired because now that’s how I am as an person – firm and confident with everything I do in life.

To all this, Shafinaz simply says:

If you’re hardworking and have faith in yourself, it will take you through these trying times because all hope is not lost.

If you’d like to get in touch with Shafinaz to support her business, she is available to sell Milo at events and can be reached at +6019-308-1799.