PUS are calling for cost transparency, and if needed, an investigation. 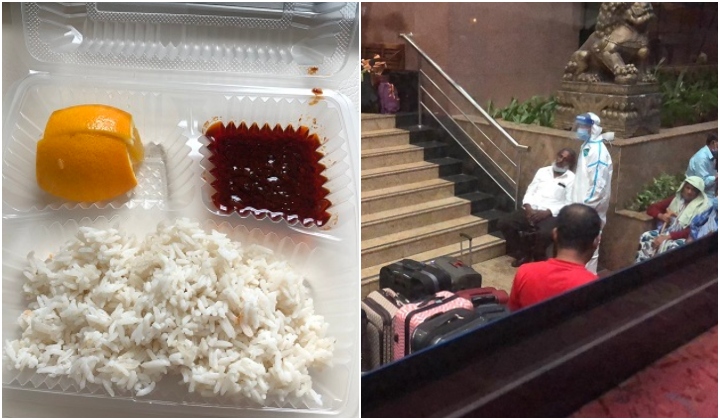 As the government announced mandatory quarantine at designated centres for all entering the country from 24 July onwards, little did a group of travellers trapped in a USJ hotel know that they were in for a nightmare.

The issue first came to light when a Twitter user tearily shared the reality of their quarantine at the hotel where meagre portions of food were served, including “nasi lemak” that consisted of only rice and sambal.

Hello, I am back in Malaysia and in my Day4 of quarantining myself in a hotel in USJ. As a foreign student in a foreign land, I learned a lot and as a government servant myself, I want to treat anyone who comes to Malaysia, the same I was treated in Seoul. This is a thread. pic.twitter.com/U2pFatMaTd

In fact, all returning Malaysians sent to quarantine centres in Malaysia are required to pay RM2,100 for the 14-day stay – with the exception of those travelling for official government purposes, students and persons with disabilities.

The Health Ministry confirmed on 2 August that there are currently 21 quarantine centres for those who enter Malaysia (16 hotels and 5 public training institutes).

However, the quality and experience between each centre wildly differs from one another. Travellers also don’t get to choose their quarantine centre.

The USJ hotel in particular has been the subject of much issue, especially among the Persons Under Surveillance (PUS) currently serving their mandatory quarantine there.

Jack Lim, who has been in the hotel since 30 July upon return from Cambodia, told TRP that his room was given to him in appalling condition, with stained sheets, mouldy walls and bugs. Even after the hotel changed his room following complaints, the stained walls remained.

After the viral tweet, they did try to improve, but the change is just by giving more food. The quality is still bad and the food is served cold.

This sentiment is echoed by a fellow PUS at the same hotel Aizat Zahar, who checked in a day later at 1am to face similar issues.

By 1am we got to our room but we were offered no food despite having had our last meal about 20h earlier on flight and they told us to buy instant noodles sold at RM10 for 3 packs. That was my dinner. And the next few days until now it has been endless frustrations with slow wifi, unsavoury food and the fact that nobody could give us full information about anything.

The 28-year-old also revealed that the lack of Wifi are among his biggest issues as the business consultant is still required to continue working, especially given that his work requires conference calls and meetings with international counterparts.

His only saving grace is a Malaysian SIM card delivered by a friend to the hotel after he landed.

No replies have been given to my follow up queries on when this will be fixed. The original response was it will be fixed on Monday. I asked the hotel several times already via message but there’s no reply.

But even more seriously, the lack of internet connection means that Aizat is unable to update his health status on the MySejahtera mobile application – a mandatory requirement for those who are under quarantine.

An e-mail reply from National Disaster Management Agency (NADMA) to the PUS states that “investigations and immediate action will be taken.”

As of the time of writing, Aizat states that the hotel has yet to fix the Wifi issue – which underscores the biggest issue of all.

No one is telling us anything

Both Jack and Aizat revealed that the communication problems began from the moment they landed in Malaysia.

Jack affirms that the frontliners were all really friendly and helpful but no returnees knew where they were going.

Even after the viral tweet outed the sorry conditions with Subang Jaya ADUN Michelle Ng and MAH president intervention, little improvements are seen as the food remains as bland as ever.

As the ADUN of Subang Jaya, I am ashamed. I have contacted the management and requested that they improve. https://t.co/06Q1ziGtoc

But for those quarantined in the USJ hotel, communication remains a big issue.

It is frustrating that we were treated like prisoners in a sense with no information given and yet we are asked to pay the amount and go to our room and just stay and accept our living conditions.

Jack even revealed that he had resorted to messaging the hotel on Facebook, who “blue-ticked him” and did not respond.

“It is really not mentally easy to be confined in a room with bad food and no Wifi,” admits Jack but with the exception of the hotel itself, he still maintains that everything is fine. All he asks is that the government scrutinise the hotels designated as quarantine centres.

There must be a passing grade who can make it to the selected hotel. Or if there are not enough hotels, alternatively charge returnees a rate based on the hotel they’re staying in.

Aizat also says there is a need for transparency in the costs of the quarantine as the services in other hotels wildly differ despite returnees paying the same RM2,100 rate (RM150/night).

This is what we paid and what everyone has to pay no matter where they are quarantined, so why is it the food given was bad and we still don’t have internet? We need cost transparency. I propose an investigation because I cannot fathom if the hotel is profiteering from this and we are ultimately affected negatively.

The RM2,100 rate is the subsidised amount, only half of the full cost of the quarantine estimated to be RM4,700 per person – which not only covers accommodation and 3 square meals per day but also transportation, personal protection equipment (PPE) for health staff, security and secretariat services as well as cleaning and decontamination services at quarantine stations.

The Malaysian government government bears the remaining RM2,600 or 56.3% of the cost of quarantine for each Malaysian returning from abroad.

They Are Dying: Hospitals Are Filling Up With The Young, The Unvaccinated, & Anti-Vaxxers