‘The Malay Tale Of The Pig King’ is adapted by Heidi Shamsuddin with Evi Shelvia’s stunning illustrations. 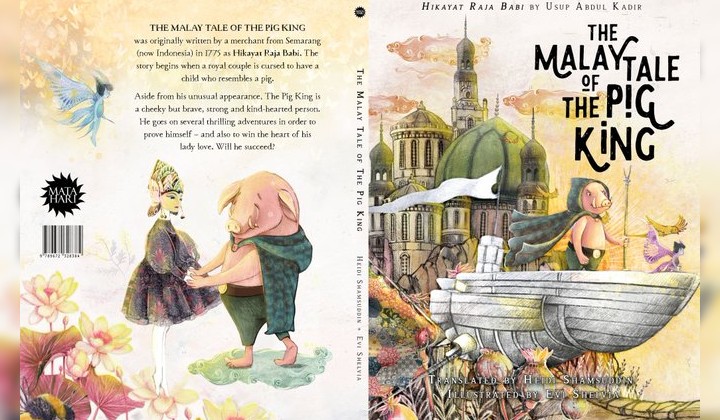 Some of you may have heard of ‘Hikayat Raja Babi’, some of you may not – both are understandable as the tale itself is nearly 300 years old and somehow got lost in the shadows of more prominent Malay folklore such as ‘Puteri Gunung Ledang’ or the recently controversial ‘Dayang Senandong’.

But 2020 marks the time for the tale of a prince cursed to be born in the body of a pig to finally be in the spotlight – this time as a beautifully illustrated picture book in English called ‘The Malay Tale Of The Pig King’.

‘Hikayat Raja Babi’ is one of my favourite epics but it was almost dead – which is why I wanted to bring him back. I wanted to adapt this story to suit our lives today because this is how stories, especially fairy tales have been adapted and modified through time.

Written by a merchant named Usup Abdul Kadir who was sailing from Semarang to Palembang in 1775, the tale is an inspirational one where the hog-bodied prince overcomes adversity and prejudice through his intelligence, courage, and good heart.

This Hikayat was unusual because it had an identifiable author – Usup Abdul Kadir – and it wasn’t commissioned for the royal family. The result is a manuscript which was written for the pure joy and entertainment of the author, and contains fantastical elements which would rival any epic fantasy book we have today.

Sadly one of the main reasons ‘Hikayat Raja Babi’ remained so hidden was that the manuscript in Jawi was locked away in The British Library for so long. It was only in 2015 that Buku Fixi published the first ever Romanised script of the tale transcribed by Arsyad Mokhtar.

‘The Malay Tale Of The Pig King’ is simply the next evolution of the nearly 300-year-old Malay folklore.

Though Heidi describes the translation process as difficult and tedious due to the archaic vernacular and winding descriptions, she is excited for people to rediscover the lost tale and watch it continue to evolve.

‘Hikayat Raja Babi’ didn’t really survive and was kind of lost but now, it’s been resuscitated as a children’s book, and hopefully this will propel the story into other forms – modern retellings, movies, video games etc.

In fact, when she gave the world a little sneak peak of ‘The Malay Tale of the Pig King’ cover art by Evi on social media, the reception was overwhelmingly positive with the crowdfunding campaign by Matahari Books – an imprint of Buku Fixi specializing in non-fiction- achieving their target in just two short days.

My new picture book ‘The Malay Tale of the Pig King’ is based on Hikayat Raja Babi and will be out soon. Isn’t the cover gorgeous? ❤ #TheMalayTaleOfThePigKing #HikayatRajaBabi pic.twitter.com/DTirJMOk4m

Initially, I wanted to target children between 9 – 12 years old, together with their parents (who will be buying the books). The language of the story is simple but I tried to make it lyrical in order to appeal to older readers. However, it seems that we may have tapped into another market – adults who are after a beautifully illustrated Nusantara story.

However, Heidi is aware that some may not be pleased with ‘The Malay Tale of the Pig King’ – be it for missing out different aspects of the story or the artistic choice of the illustrations where some have accused the publisher of “whitewashing a Malay tale.”

Nonetheless, she welcomes the comments – noting that it can contribute to a lively discussion on how traditional tales should be represented, and most importantly, it is literally bringing ‘Raja Babi’ back to life.

This book is Evi’s and my adaptation and interpretation of ‘Hikayat Raja Babi’. It’s just one small aspect of the whole tale. Those criticising are free to write their own adaptation. In fact, I would actively encourage them to do so because this is how stories proliferate and disseminate.

But at the end of the day, the resuscitation of a long-forgotten folk tale is always welcome and as Heidi puts it, the tale itself is “simply a good, cracking read!”

‘The Malay Tale of the Pig King’ will be out in late August and available online at Buku Fixi’s website (HERE) and Shopee store (HERE).

#TheMalayTaleOfThePigKing may now be purchased! Only 900 copies are still available.