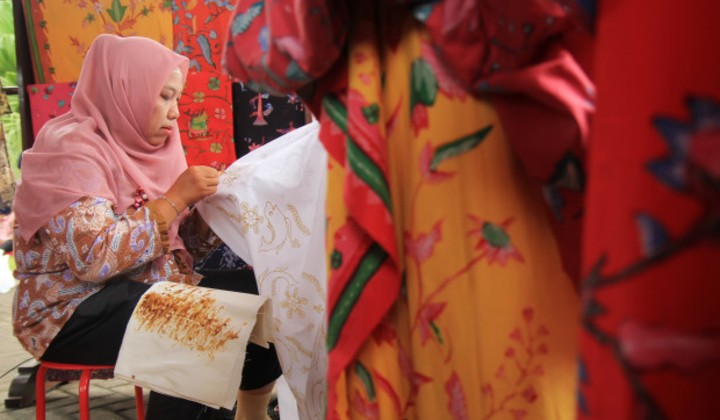 On 12 July, Chinese news portal Xinhua released a short video of batik crafts, claiming that batik is a traditional craft common among ethnic groups in China together with the hashtag #AmazingChina.

Naturally, oodles of people were quite upset, considering that batik is widely acknowledged to be culturally important in Java, Indonesia, and commonly used all across the Asia Pacific, including Malaysia.

Indonesians stormed the tweet, saying that “China is the master of copycat” and took defended their claim on the national pride.

Later on, Xinhua clarified in a Tweet that the technique shown in the video of wax printing is also known as batik, acknowledging that the word batik is of Indonesian origin.

The Chinese word for batik is 蜡染 (là rǎn) which literally translates to wax dye, after the wax-resist dyeing technique. The word batik is derived from Javanese, most likely from the words amba (‘to write’) and titik (‘dot’), after the designs using the aforementioned technique.

Batik has also been recognized as a UNESCO Masterpiece of Oral and Intangible Heritage of Humanity back in 2009, solidifying its status as a contribution to Javanese culture.

However, while batik is clearly an integral part of Indonesian culture, the techniques, art, and dyes were not necessarily invented there.

History is less clear about “origins” of things. According to a study, many ancient civilizations have practiced systematic dyeing. After all, ancient Egyptians have had coloured wall hangings as early as 3000BC, about the same time that the Chinese have had systematic dyeing of fabric.

Even the more sophisticated technique of wax-resist dyeing, of which is used to create batik’s colourful patterns and designs using melted wax, has been discovered as early as the Sui Dynasty in China (581-618AD), and later in Japan during the Nara period (710-794AD). Later on, the cloths and craft most likely followed trade routes into Southeast Asia, Middle East, and even Africa.

Yet it is in Java, Indonesia that batik truly developed to great artistic heights. It is not really known exactly when Indonesia began their tradition of making batik, as it predates the country’s written records. Some believe that it was invented natively, as Indonesia has readily available cotton, beeswax, and plants for dye. Others believe that the craft was introduced during the 6th or 7th century from trade with India.

However, just because batik didn’t originate in Java itself doesn’t take away how culturally important the craft is to Indonesians.

Undoubtedly, Indonesian craftsman elevated the art to another level, and its people have widely adopted the use of batik in their culture, in everything from swaddling babies for good luck and shrouding the dead for a peaceful passing. Their whole-hearted adoption of batik into their everyday lives is the reason why batik is so closely associated with the Javanese.

Our world was never separated by drawn lines and mapped borders in the past. Humanity has always been a melting pot of shared cultures, crafts, and trade. Even things that later on become associated with a certain nation may have its roots elsewhere, just like our own palm oil trees that originated from West Africa!

So whether or not batik was invented in Indonesia isn’t as important as the cultural significance the craft has in Indonesia, and by extension to the countries that love and use batik. (Like Malaysia, too!)