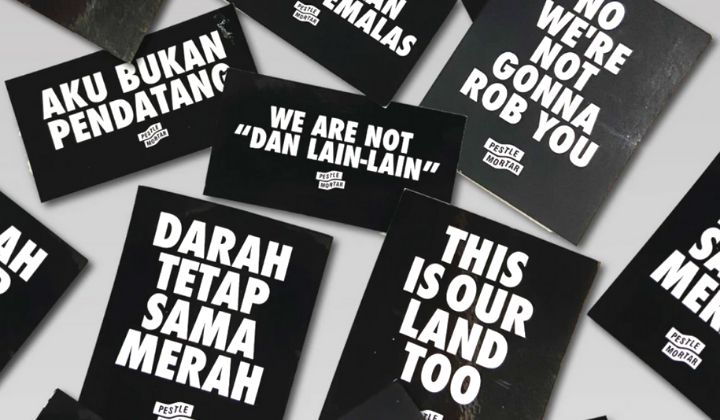 Just last week, we received a packet of stickers from Pestle & Mortar Clothing (PMC) printed with a bold statement on the packaging:

We Stand Against Racism

PMC is a familiar name to many Malaysians. The local fashion brand is known for localising streetwear, fusing hyperlocal motifs into their range of clothing and accessories. They have also collaborated with AirAsia earlier this year to release a branded collection, which featured designs by seven fashion designers from the Southeast Asian region.

As such, we were a little surprised to receive the stickers – which we were told is from their latest campaign titled “Darah Tetap Sama Merah” (loosely translated to “We All Bleed Red”).

Because, what does fashion have to do with social issues like racism anyway?

A TLDR explanation of the relationship between streetwear and social issues

Streetwear has a history of being political and vocal about social issues. However as the style slowly grew into a billion-dollar industry, some streetwear brands have moved away from their socio-political roots to avoid controversy and stay ‘safe’ as a business.

This, however, is not the case in the past few years. Back in 2017, high-end fashion designers incorporated bold social statements onto their creations which were modelled during New York Fashion Week. More fashion brands – like Gucci, Toms, and Levi Strauss & Co. – have also started to make their stand known in social issues, such as supporting gun control in the United States of America (USA).

All these were done with brand executives publicly acknowledging the risk of alienating people who may have been big fans of the brands. So why did they decide to go ahead with the social media campaigns and press statements?

Because we live in an age where brands feel that they just cannot afford to stay silent anymore.  This is felt strongly by those in the fashion industry – since fashion goes more than just being wearable artistic pieces, but also recognised as a mode of self-expression.

And if luxury as well as mass fashion companies are taking a stand, what more streetwear brands that were birthed from from the subcultures of socio-political stances?

Why PMC chose to talk about racism through stickers

Most Malaysians would agree that racism is a social issue we struggle with on a daily basis: it is present in the political arena as well as in the job and rental markets, too.

But we were still curious as to why PMC chose racism as a subject for their debut statement sticker collection. Kana, PMC’s Branding & Marketing Manager, explained, “With the death of George Floyd in the US, we saw many people coming together to support the fight against racial discrimination throughout the world. That motivated us to continue the same fight against racism in our country.”

He also added that the brand specifically chose to spread the message through stickers as it is a more inclusive medium that is also capable of reaching a larger audience – even those who are not fans of their brand or products.

Rather than making t-shirts & apparel showcasing the racist statements that we often hear in Malaysia, we wanted to eliminate as many barriers as we could in terms of spreading the message to a wider audience… Stickers are something that everyone can champion, regardless of your age or dressing style.

With the use of stickers, PMC is able to eliminate barriers such as design preference and sizing problems to more effectively spread the message that darah kita tetap sama merah. On top of that, anyone can get these stickers for free from the Major Drop store in Sunway Pyramid.

No one should put a price on the fight against racism; and championing a good cause should not come at a cost to anyone.

As stated on their website, PMC firmly believes that fashion is “a projection of our personal lifestyle, culture, and homeland”. You wear something not just because you like the design, but also because it reflects what you believe in and advocate.

Kana added on to that by saying that fashion is about taking meaningful action:

As a streetwear brand, the segment of people that we speak to is the younger adults – from students to people who are kicking off their career. As these people are the future of the country, we see it as our responsibility to use our platform to spread the right message for a better future of our country and region (Southeast Asia).

The collection of stickers features a series of common racial slurs that every Malaysian is familiar with, whether it is directed at them or their friends. While these stereotypes and slurs are meant to put people down, PMC turns them into empowering statements that boldly counter racism:

And it goes without saying which statement is the most powerful one – the one they chose as the name of the campaign:

You can get Pestle & Mortar Clothing’s ‘Darah Tetap Sama Merah’ stickers for free from the Major Drop store in Sunway Pyramid.