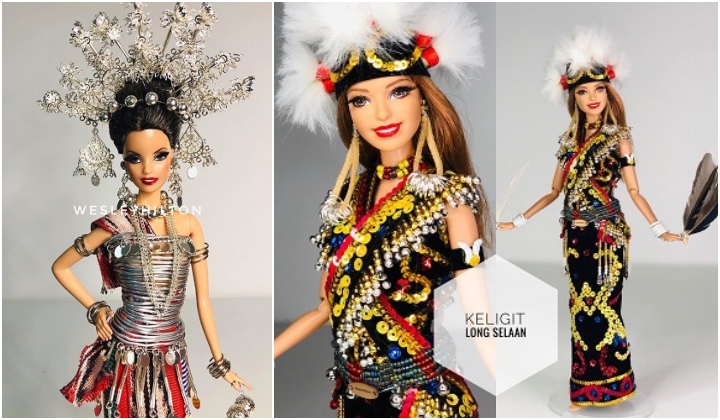 A Barbie doll often conjures up the image of a blue-eyed blonde, clad in pink and of course, looks nothing like a Malaysian.

However, one Sarawakkian man who never lost his love for the doll has turned it into an object of personal beauty –  Borneo Barbie dolls!

Scrolling through his Instagram account (@wesleyhilton), you’ll be greeted with images of the dolls dressed in the traditional gear of various tribes on the island.

His work has even reached the Tourism, Arts and Culture (MOTAC) where Minister Datuk Seri Nancy Shukri enthused that his handmade pieces have the potential to be marketed as tourism products both locally and abroad.

The gorgeous outfits, elaborate headdresses and delicate accessories belies the amount of talent, skill and work that goes into making them.

Due to the amount of time needed to customise a doll, his endeavours have been far and few in between.

Wesley told the New Sarawak Tribune that he’s actually been creating bespoke Barbies since 2017 when he transformed them into flight attendants from numerous airlines, as he was a flight attendant himself.

Then, the pandemic hit.

With the aviation industry at a standstill and all flights grounded, Wesley now found ample time on his hands and set to create this deeply personal series of Borneo Barbie dolls.

Through this project, I really hope that people will get a bit of information on the uniqueness and meticulous designs of Borneo’s traditional costumes. It is hoped that this Borneo Edition Barbie will also inspire young people to continue preserving our uniqueness that is Borneo.

However, it doesn’t stop there.

Wesley’s bespoke dolls serve not only to highlight Bornean culture, but their struggles as well.

After hearing of the Long Sela’an tragedy where a fire razed through a 12-door longhouse in Sarawak, Wesley decided to auction off an Orang Ulu inspired doll to help raise funds to rebuild the longhouse for some 60 now homeless villagers.

To help with the recent tragedy that happened to the Long Sela’an village, Wesley Hilton decided to auction off an Orang Ulu inspired doll to help raise fund to rebuild the village. Starting bid starts at RM300. This auction runs till Friday! DM/PM ur bid here on my Instagram!! All proceeds will be donated to the cause. In collaboration with @hitzsarawak ❤️ #onedollcanmakeadifference

While the bidding for the Keligit Long Sela’an Barbie is now over, you can still place your order for a multitude of other Bornean Barbie beauties on his Facebook (HERE) and Instagram (HERE).