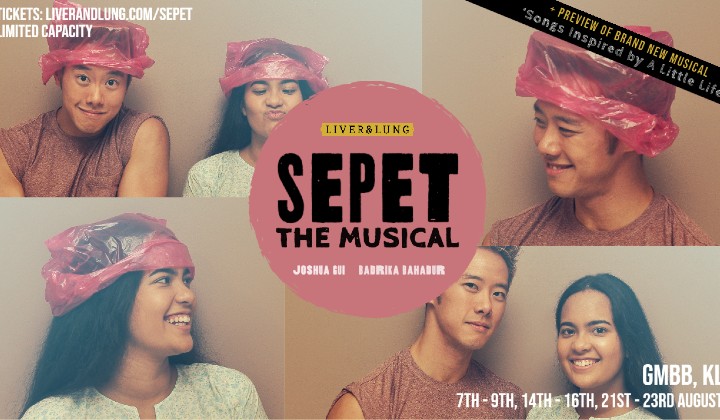 If you loved watching Sepet The Musical when it was streamed on YouTube for free during the Movement Control Order (MCO), then you’ll love watching the touching performances in person when the production returns to the stage this August.

This is all thanks to the Liver & Lung theatre company who wanted to celebrate their recent win at the Boh Cameronian Arts Award for Best Direction for Sepet The Musical.

Directing Sepet The Musical was a life changing experience. We wanted to celebrate the win by reviving the show for new audiences and bring the hope that Yasmin Ahmad inspired to a post-Covid world. It’s time that Malaysia enjoys theatre again.

The revival of the critically acclaimed musical will see co-founder of Liver & Lung and Best Direction in Musical Theatre Award at the BOH Cammies Shafeeq Shahjan return to the director’s seat.

Not only that, director of the musical and co-founder of Liver & Lung, Shafeeq Shahjan wants viewers to come dressed in their best Sepet-inspired cotton baju kurungs.

While audiences will laugh, cry and cheer Jason and Orked in the 2 hour 45 minute musical, they will also be privy to a brand new musical Songs Inspired by A Little Life with a 30-minute preview.

The production’s double bill run will be staged over three weekends in August (Fridays through Sundays), in partnership with GMBB mall in Bukit Bintang:

As with the new normal, there will be health standard operating procedures (SOP) in place which include temperature screening, face masks, 1-metre social distancing and limited seating capacity.

Shafeeq also exclaims that food will be served “MCO-style.”

Tickets for the long-awaited production can be purchased at the Liver & Lung website (HERE).