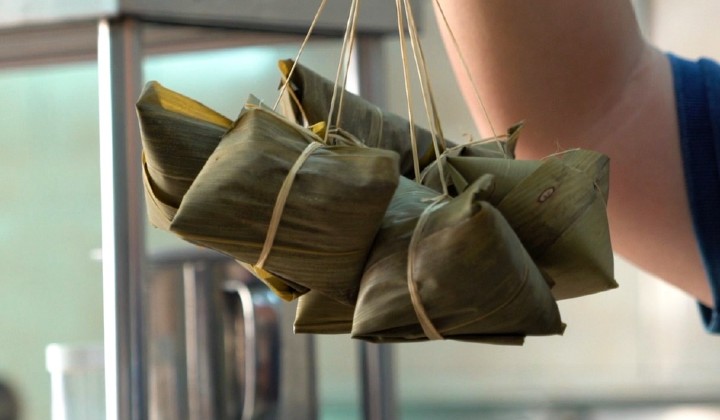 You may have seen zong zi (粽子) being sold at Chinese restaurants and hawker stalls and wondered what kind of food that is. It’s a pretty unique pyramid-shaped dish wrapped in leaves, much like the Malay ketupat.

In fact, it’s even similar on the inside, as zong zi, also known as bak zhang, is a savoury “dumpling” made of glutinous rice and filled with mung beans, chestnut, braised pork, shiitake mushrooms, and salted egg yolk. Fillings may vary, but the end result is a hearty, sticky, delicious meal in a wrap.

But what’s the significance behind zong zi?

It’s actually part of the Duanwu Jie, also known as the Dragon Boat Festival, celebrated on the fifth day of the fifth month of the lunar calendar. Usually this festival falls somewhere around the summer solstice. This year, 2021, Duanwu Jie will be held on 14 June!

Now you may be wondering how sticky rice dumplings and dragon boats are related, and the easy answer is death.

Specifically, it was the suicide of poet and minister Qu Yuan during the Zhou Dynasty in China that began the traditions of Duanwu Jie, according to legend.

Qu Yuan was a minister to the ancient state of Chu, during a time when they were warring with the other ancient state of Qin. Qu Yuan was well-known for being a patriot who loved his country and expressed his deep concern through poetry and literature.

Due to politics, he was exiled from Chu, and spent even more time writing poems. Upon learning that the capital of Chu was captured by Qin, he fell into a deep depression. Eventually, he committed suicide lamenting the downfall of his beloved state by wading into the Miluo River while holding a rock.

Villagers who lived in the area were fond of Qu Yuan, and raced out on their boats to find and save the poet, or at least recover his body. However, while they did not manage to actually do so, this is said to be the origin of dragon boat racing.

The villagers, undaunted, returned to the river once again. This time, they dropped sticky rice balls with filling inside, praying that the rice ball alternative would be delicious and filling for the fishes in the river so that they would not eat Qu Yuan’s body. This is said to be the origin of zong zi, the sticky rice dish.

Nowadays, people just eat the sticky rice instead of throwing it into the river, and you can easily buy it during this period.

In fact, Malaysia has a special flavour of zong zi in a peranakan style called nyonya zhang, noted for its distinctive sweet flavours and tinted blue with bluepea flower extract instead of the regular sticky-savoury dark brown of regular zong zi.

While zong zi is traditionally made with pork, there are halal versions and even vegetarian versions easily available for purchase.