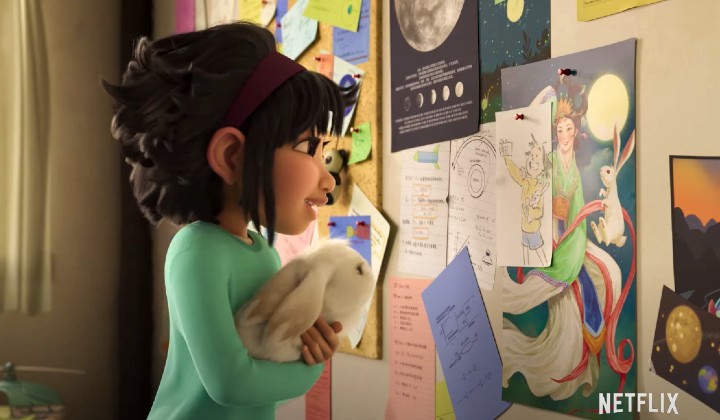 Netflix is releasing a new movie based on the legend of Chang’E, the lady on the moon. If she sounds vaguely familiar, it’s because Chang’E is closely tied to the annual Mooncake Festival, or the Mid-Autumn Festival.

The new show is called Over The Moon, in which a young Asian girl builds a rocketship to launch herself into the moon, chasing after her deceased mother, who was forced to leave the world just like Chang’E.

Legend has it that Chang’E took a magic elixir of immortality, forcing her to be separated from her beloved husband. She then took up residence on the moon with a magical rabbit, to be known as The Moon Goddess.

Over The Moon is proving to be a diverse addition to the heartfelt animated movies out there, as the trailer itself shows the vivid culture and traditions surrounding the Mooncake festival, such as lanterns, a family reunion, and even a beautiful snow-white bunny called Bungee.

What makes Over The Moon truly special is also the outstanding voice cast for an animated musical! Yes, there will be lots of singing and new songs for everyone to enjoy. Watch out for recognizable voices from Cathy Ang, Phillipa Soo (Hamilton), Ken Jeong (Community), John Cho (Harold & Kumar), Ruthie Ann Miles (The King & I), Sandra Oh (Grey’s Anatomy), Robert G. Chiu, Margaret Cho (All-American Girl), and Kimiko Glenn (Orange Is The New Black).

The show is slotted to premiere later this year, most likely around mid-autumn, so you don’t have to wait too long to watch the movie!

Watch the trailer for yourself here (and prepare a tissue if you cry easily- I did!):