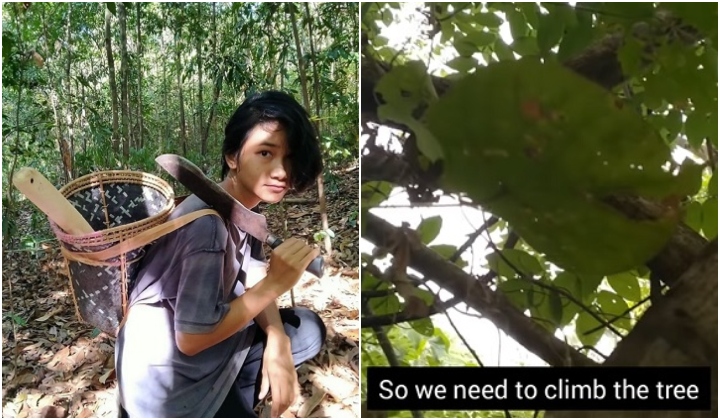 As most classes from primary to tertiary education remain online in the pandemic era, a good internet connection and adequate digital devices can easily be taken for granted.

However, one particularly remarkable Sabahan student who spent 24 hours atop a tree just to get a good enough internet connection for online exams serves as a reminder of those who are left behind in the digital gap.

Veveonah Mosibin is a foundation student at University Malaysia Sabah (UMS) who started a YouTube channel a month ago during the Movement Control Order (MCO) period to share her life in what is presumably a rural area in Sabah.

Veveonah actually did not intend to spend the night atop a tree to do her online examinations. The young Sabahan had initially planned to take her online exams in a hut she had built a few weeks prior atop a hill that had good internet connection.

Unfortunately, she found the hut had partially collapsed, probably due to the strong winds and heavy rains over the past few days.

Not one to give up so easily, the resourceful young woman quickly decided that the top of a tree is the next best option.

Armed with a phone, powerbank, a bottle of mineral water, some food, mosquito netting and tools to aid for her online exam, her 24 hours began.

While the online exams went along well enough, her stay at the tree was not so easy.

She had a particularly  scary brush with a giant hornet (aka Asian murder hornet) that somehow made its way into her makeshift treehouse. In the video, Veveonah also lamented that she did not sleep well as the night was cold and full of strange noises.

This particularly resourceful young woman shares videos that have a similar vibe to the Primitive Technology YouTube channel, showing how she builds a traditional underground well, cooking cassava outdoors on firewood.

In her videos, it is also revealed that the dynamic Sabahan works every day in her family’s orchard in order to have enough food to eat. She also mentions that her family goes to bed soon after sundown, around 7pm, to save on candles as they do not have electricity at home.

It’s clear that Veveonah does not have an easy life, but her optimism and savviness makes her a very inspirational figure.