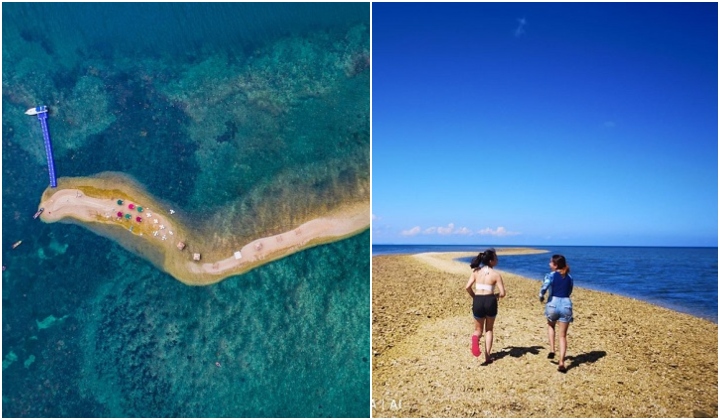 Subscribe to our new Telegram channel for updates on the latest issues.

When one thinks of Sabah, the stunning sight of Mount Kinabalu or the gorgeous beaches of Sipadan often come to mind. But the state is a literal treasure trove and the Pitas floating coral bar is one fine hidden gem.

In the middle of the sea near Malubang village in Pitas at the northern tip of Sabah, the 1-km long coral island that’s surrounded by crystal blue waters only appears during the low tide. Otherwise, the disappearing island dips into the invitingly clear waters at high tide.

And it’s not like any other island, either. The thin strip of land is actually the product of sea currents washing heaps of coral fragments together to form a naturally low island made entirely of coral.

Due to its elusive nature and isolated location between the South China Sea and Sulu Sea, this stunning island was only recently discovered in the past few years.

Its potential for tourism was only developed later by Archangel Borneo Holiday, who fashioned it into a floating bar experience. So, those who set foot on the coral heap can not only take a leisurely stroll, but also dine on water in the middle of the sea!

In the Maldives and Caribbean islands, visitors can enjoy a water dining experience. If they can do it there, why not Sabah. The floating coral is a unique attraction and just as beautiful as Maldives.

What’s more, the sustainable tourism development was done together with Sabah Parks, WWF Malaysia, local tourism association (Supirak Tourism Association) and Malubang villagers to give the district a much needed economic boost as Pitas has one of the highest rates of poverty in Sabah.

And so, this magical spot in the sea became a source of joy to both the villagers and travellers.

Since its opening in April 2019, the villagers not only prepare the food, but also carry local tourists over in their boats. Archangel Borneo Holiday focuses on bringing international tourists.

Once on the coral island, tourists can choose to stroll and take pictures at the floating jetty, floating deck, huts, swing. On the other hand, adventurers have the option to jump into the sea with water activities such as snorkeling, kayaking, paddle boarding and floating carpets.

Exploring the depths of the sea is highly recommended as the disappearing island is located within Tun Mustapha Marine Park, Malaysia’s biggest marine protected area and the second largest concentration of coral reefs in the nation.

While the journey to the Pitas floating coral bar may be a long three-hour drive from Kota Kinabalu followed by a 40-minute speedboat ride, it’s beauty certainly makes it all worth it!