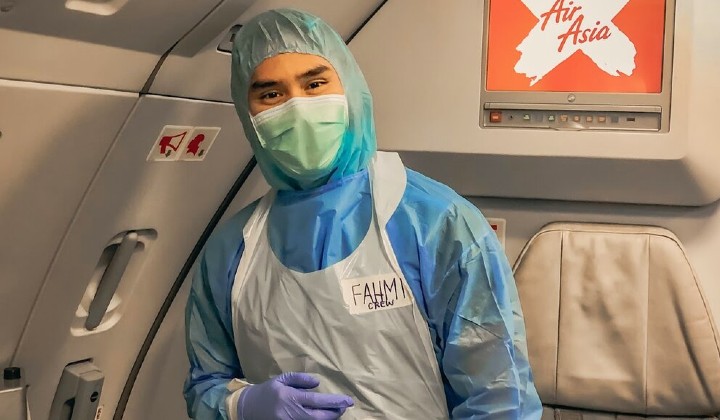 On 11th March 2020, the World Health Organisation (WHO) declared Covid-19 a pandemic and it wasn’t long before borders around the globe began shutting down.

Flights were cancelled, airports were closed and stranded travellers raced against time to come home.

Among those who were looking for their way home included Malaysians who found themselves trapped amid the panic in Iran. But thanks to the Humanitarian Assistance and Disaster Relief (HADR) mission, 46 Malaysian nationals and 9 citizens of neighbouring countries were successfully repatriated home on 22nd March via a special chartered AirAsia flight.

It’s clearly no easy task, and the circumstances surrounding the flight was certainly out of the ordinary.

Fahmi Esmail, one of the AirAsia cabin crew members who was part of the rescue operation describes it as daunting.

I had mixed feelings when I first heard that I will be operating the rescue flight to Tehran. I hesitated initially because of the state of the pandemic in Iran but at the same time, this is one of the rare chances where I can actually serve my country and help my fellow Malaysians.

Fahmi only had three days notice from the date of departure. Unsure of what to do, he called his parents who were very clear in the decision they knew their son had to make.

“Go and bring our fellow Malaysians home,” said his father with conviction.

They were well aware of the severity of the pandemic, but their hearts went out to their fellow Malaysians stranded in a foreign land with the world screeching to a halt.

As a rule, cabin crew members had to be well rested and physically fit to operate a flight.

However, this was no ordinary flight and the selected crew had to do a bit of studying before the mission.

Precautionary steps, specialised procedures and manuals on personal protective equipment (PPE) were given to the crew members in preparation for the rescue mission.

I also found out that instead of our usual uniform, we will be wearing polo tee and pants underneath all the layers of PPE to ensure that we can be more comfortable and move around easier.

On the day of the flight, the crew were briefed by the National Disaster Management Agency (NADMA), Health Ministry (MOH) as well as a few other government agencies who also took part in the mission. Medical and government officials also joined the crew on the flight.

After another round of detailed PPE briefing, it was time to put on the protective layers.

Over the alternate uniform, the crew members donned a plastic gown, head cover, shoe covers, gloves, mask and goggles that had to be worn throughout the rescue mission.

Then we all moved together to the aircraft. That moment somehow reminded me of an iconic scene from an old movie I saw called “Armageddon”, where the characters walked together in their spacesuits to a spaceship ready to save the world!

Fahmi describes the flight back as relatively calm, but there were many rules in place.

The aircraft cabin was divided into three zones – Green, Yellow and Red and the seats were marked to indicate which seats were to be left empty to space out the passengers.

None of the crew members was allowed to leave the aircraft upon landing in Tehran.

Food and water were also pre-packed and placed in the seat pockets to minimise social engagement.

In fact, the only times the crew members spoke to the passengers were to greet them upon embarking the plane. Only the medical team members could attend to their needs onboard.

As I bid them welcome, I could tell that they were tired and couldn’t wait to get home.

Besides that, the crew were instructed to face the passengers at all times as the weakest part of the PPE is the back. They were also not allowed to use the toilet at all as it would risk contaminating the PPE. So, they had to carefully plan meals and limit water intake.

Landing back in Malaysia

All of us heaved a huge sigh of relief when the aircraft landed at Kuala Lumpur, and I could see the joy on the faces of our guests!

Disembarking the flight was another carefully planned procedure that was done according to the zones. First Green Zone with pilots and crew members, then Yellow Zone with engineers, government officials, more crew members, and finally the Red Zone with all passengers, medical team and the last batch of crew members.

Once people got off the place, everyone went through a decontamination process by the Hazmat (Hazardous Materials) team from the Fire and Rescue Department. The same team also disinfected the aircraft.

Right after decontamination, everyone was transported to a designated quarantine centre for health screening. They remained there for two days, awaiting test results.

Alhamdulillah, the test result came back good, so we were allowed to continue self-quarantine at home.

Despite the danger and difficulty of the operation, Fahmi has no regrets. He says he’ll do it again in a heartbeat!

When he shared his experience on social media, many Malaysians thanked him for bringing our countrymen home, including the families of the repatriated passengers.

But Fahmi remains humble, thanking NADMA, MOH, the medical officers, Bomba Malaysia, the AirAsia team and everyone who was involved in the mission for their continuous effort in battling the pandemic.

It made me immensely proud, but I am only just a part of a huge team of a few hundred behind this operation, and all of them have contributed much more to the mission behind the scenes than me!