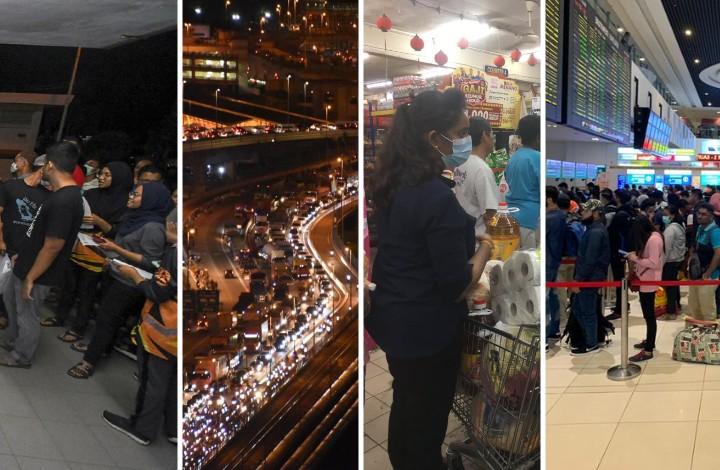 Malaysia’s response to the Covid-19 coronavirus has swung widely between good and bad in large part due to a political crisis that struck the nation between February and March 2020.

When Covid-19 first began making waves in China, the government was helmed by 95-year-old Tun Dr Mahathir Mohamad in his second run as Prime Minister, with toxicologist Dr Dzulkefli Ahmad in the role of Health Minister.

The reaction of Dzulkefli was consistent and measured. He tweeted frequent updates on the situation and was widely praised for his management of it.

Temperature checks were set up at the country’s entrypoints, travelers from affected districts were scrutinised and those found to have contracted the disease were hospitalised and quarantined.

Some hospitals were classified as diagnostic centres where people could be tested, while others admitted patients for quarantine.

For weeks after the virus arrived on Malaysian shores, it was almost exclusively found in tourists and some even began to recover.

Then, in the last week of February, a political coup was sparked which would eventually see Dr Mahathir, a medical doctor himself, supplanted by his own Home Minister and career politician Tan Sri Muhyiddin Yassin.

While all attention was focused on the coup, on February 27, a three-day religious gathering of over 15,000 Muslims took place at a mosque in Sri Petaling, where attendees both foreign and local shared food and slept side-by-side.

At the time of writing, that event accounts for more than half of Malaysia’s 1,030 Covid-19 cases and two out of the country’s three deaths. Many of the attendees have gone into hiding out of fear of reprisals.

While that timebomb ticked away, on March 1, Muhyiddin was sworn in as Prime Minister and on March 9 he appointed medical doctor Datuk Seri Dr Adham Baba as the new Health Minister.

Since then, their response to the coronavirus crisis has not only been the object of public scorn and ridicule, but has been reflected in the country’s stock market.

In the first few days of the political crisis, more than USD10 billion was wiped from Bursa Malaysia but that was nothing compared to what happened as cases of Covid-19 began to spike.

Amidst all this, on Saturday March 14, Muhyiddin allegedly played golf.

On Monday, he told the public that he would be making an announcement related to the Covid-19 crisis later that night.

While waiting for the announcement crowds of Malaysians fearful of a lockdown or that a State of Emergency would be declared, risked infection as they thronged supermarkets in a fit of panic buying.

Instead, that Monday night, Muhyiddin advised Malaysians to stay home for two weeks starting Wednesday and said that travel would be restricted in and out of the country.

The message was only delivered in the national language of Bahasa Malaysia, leaving many non-speakers in confusion as English news outlets still translated it as a lockdown.

The government sent out a circular that same night, explaining that it was being official labeled as a “Movement Control Order” (MCO), a vague term that would still require clarification the next day.

Again people rushed to the supermarkets in droves to prepare for the MCO, risking infection a second time as the government prepared a list of common questions and answers, again only in Bahasa Malaysia.

A meeting between the states was held, but the Chief Ministers of states that were held by the opposition were left out including Selangor, the worst hit state in the country.

Then the MCO came into effect, shutting down schools and universities but while international travel was banned, inter-state travel was not and crowds of tertiary students rushed to bus-stations in an effort to get home.

It has been reported that at least one of those buses, traveling from the southern tip of peninsular Malaysia to the central state of Pahang, carried an infected individual.

Muhyiddin went on TV a second time, calling for people to stay home and “watch HBO” after rebellious Malaysians continued to patronise their favourite restaurants and markets, with some even organising small gatherings.

The police stepped in to try and stop long-distance travel, announcing that people wanting to leave their districts would need a permit.

Members of the public rushed police stations to apply for these permits and that same night the requirement was rescinded.

On Friday, Senior Minister (Defense) Datuk Seri Ismail Sabri announced that the army would assist the police in manning these roadblocks, but only starting Sunday.

Dr Adham also went on TV, telling people that drinking hot water would flush the virus down their throats and into their stomachs where the acid would kill it.

However, as pointed out by a popular UK-based Malaysian doctor, Dr Amalina Bakri, that claim is not backed up by the World Health Organisation or any scientific research at this time.

So, as Malaysia settles into its first weekend under the MCO, it is still unclear whether restrictions will be tightened and whether the involvement of the army will complicate matters even further.

The future of this country and it’s 32 million citizens, remains uncertain.