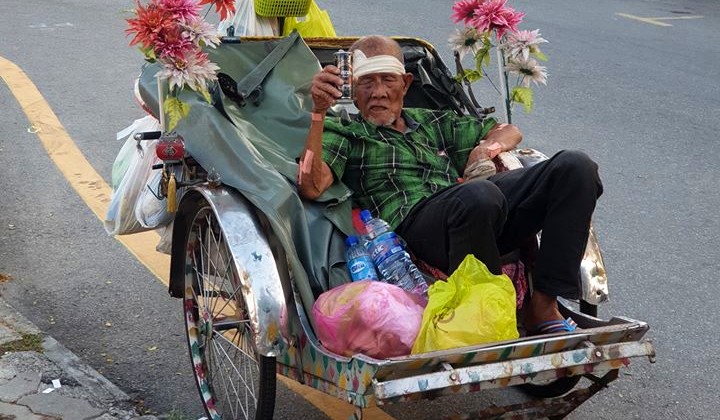 In a heartfelt post, Dr Ooi Ben Shyen wrote about Uncle Beng, a rickshaw driver in Penang who was waiting for his kopitiam to open.

He didn’t know that due to the movement control order (MCO), the kopitiam will not be open for two weeks. In fact, he didn’t even know about COVID-19, the novel coronavirus that has rocked the world and led to a total of 791 confirmed domestic cases and 2 deaths so far.

According to Dr Ooi, Uncle Beng was unaware of what was happening in the world. To him, business has been bad and there had been no customers.

Uncle Beng pulls his rickshaw by day and sleeps in it by night. He is living hand-to-mouth. And when there are no customers, there is no money to be made and no food to buy.

Since his original post in Subtle Asian Traits, Dr Ooi has gotten overwhelming response over Uncle Beng’s situation. Malaysians all over the country have messaged him hoping to donate money for Uncle Beng.

In a phone interview, Dr Ooi told TRP that he has already received RM6~7k worth of donations.

Uncle Beng’s actual family has also gotten in touch with Dr Ooi. The majority of the family is based in KL and are unable to help.

We try to help him in many ways but he refuses help and goes missing.

According to Yvonne, she was initially suspicious of Dr Ooi, who had no relation to the family and was receiving donations into his personal bank account. Later on, when they managed to get it touch, she realized that Dr Ooi simply wanted to help.

Uncle Beng has a habit of being stubborn and refusing help from his family. Yvonne recounts that a family friend once convinced Uncle Beng to go to an old folks home, but he escaped before they could send him there.

When we spoke to Dr Ooi, he had just found Uncle Beng after a search on-foot. Dr Ooi was buying him and a few other homeless persons groceries with the generous donations, since they have not eaten in a while.

Dr Ooi will also be bringing Uncle Beng to a nearby clinic to treat a head injury, since he had fallen and hurt himself a few days ago.

I’d like to make this a message of hope, to not forget about these vulnerable people during these trying times.

Uncle Beng’s story is one of the people who get forgotten by the system. The extremely vulnerable can get swept away when the little stability they rely on gets taken away.

That’s why it’s extremely crucial to make sure these people don’t get accidentally forgotten during this fight against COVID-19.

Don’t forget to extend a helping hand on the Caremongering Facebook group or #KitaJagaKita platform.