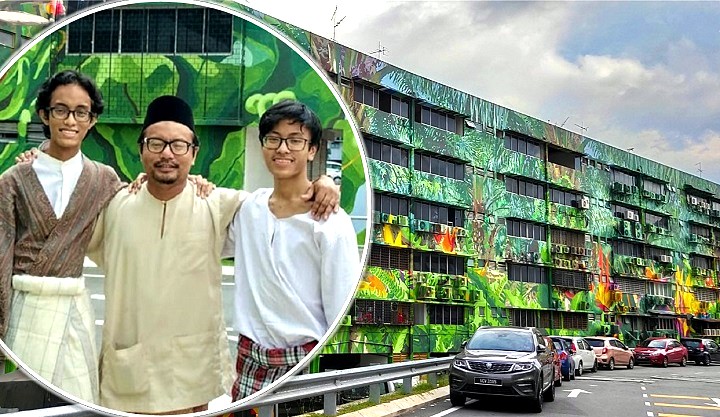 A little-known building on Old Klang Road in Kuala Lumpur is now not so invisible as it has become home to Malaysiaâ€™s largest mural.

The previously nondescript Indah UPC has managed to capture the eye of Malaysians with the stunning 2,500 square metres â€œTree of Hopeâ€ mural depicting hornbills and owls peeking through oil palms and rainbow-hued foliage.

While many headlines have focused on the architect-cum-artist, Fadzlan Rizan Johani, not much has been said about the family dynamics that went into adorning the 6-storey building.

Yep, the journey to create Malaysiaâ€™s largest mural actually started out as a family project for Fadzlan and his sons.

The mural work is commissioned by Malaysian Resources Corporation Berhad (MRCB) to DP9 Studio, where Fadzlan is the General Director while his eldest son, Azhan Rizan, serves as the Creative Director.

19-year-old Azhan revealed in a Reddit AMA (Ask Me Anything) that DP9 Studio began as a simple art studio in 2008 called Papan9 when the family was living in the UK.

However, they only began serious commercial work in 2014 after registering themselves as Dipapansembilan Studio. Then in 2018, they rebranded as DP9 Studio in a push for a more professional branding identity.

One of their first mural works was in 2014 for Shah Alam City Council (MBSA) where they won a competition to beautify Laman Seni 7. Fadzlan, and his sons now aged 19 and 17 respectively, worked together to conceptualise their design and won first place!

In an interview with Malay Mail, Fadzlan recounted that the family wasnâ€™t aiming to win, but took it as a fun family activity. But as luck would have it, their creative work won the hearts of MBSA and they were commissioned to do another project.

So how did they wind up creating Malaysiaâ€™s largest mural?

It all began with MRCB embarking on a corporate social responsibility initiative for the neighbourhood to complement its nearby development â€“ envisioning it being surrounded by nature.

In the Reddit AMA, Azhan explained that the theme of a palm oil plantation and its diversity was at the behest of MRCB, but the entire artwork was designed at their own discretion.

While Fadzlanâ€™s family is often involved with his mural work, the teenage boys sat this one out due to school. But that didnâ€™t stop them from joining their dad at the site from time to time.

On his personal Facebook, Fadzlan meticulously details the progress of his painting work, interspersed with the beaming smiles of his two boys. Whenever his sons appear onsite during the project, Fadzlan often playfully teases about them showing up just for a photoshoot and cheekily points out their clean, paint-free shirts.

Nonetheless, Fadzlan clearly has great love for his sons. When discussing the mural with The Star, the freelance architect reveals that the hidden message of the mural is; a fatherâ€™s hardship.

Humbly stating that while this may not be the greatest artwork in the world, he believes it shows that the impossible can be achieved if you put your heart to it, and also the sacrifice a father makes to provide a better future for his family.

The father of two actually spent a few years building his career in the UK as an architect and designer.

However, upon the familyâ€™s return to Malaysia in 2010, his children had trouble adjusting and the doting father quit his job to focus on their well-being. As a result, heâ€™s been working as a freelance architect since 2014.

Admitting to the challenges of being a freelance contractor, Fadzlan is still deeply grateful to the opportunities heâ€™s had, making sure to express his gratitude to wife who helped him in the planning and organising of this project as well.

We struggled as a family (though there are those worse off than us).
There are times we argue and lose patience with one another. But in the end, it taught us the meaning of sacrifice together. All thanks to love.

Needless to say, the sacrifice was worth it in more ways than one. Images of his mural have since gone viral and Fadzlan now finds himself in the spotlight with local media clamouring to interview the talented architect-artist. Thereâ€™s even whispers of making the mural a heritage site for conservation purposes, though nothing’s been confirmed.

While Malaysians rejoice in the beauty of this artwork, itâ€™s made even sweeter knowing the heart-warming story of family love that went into its creation.