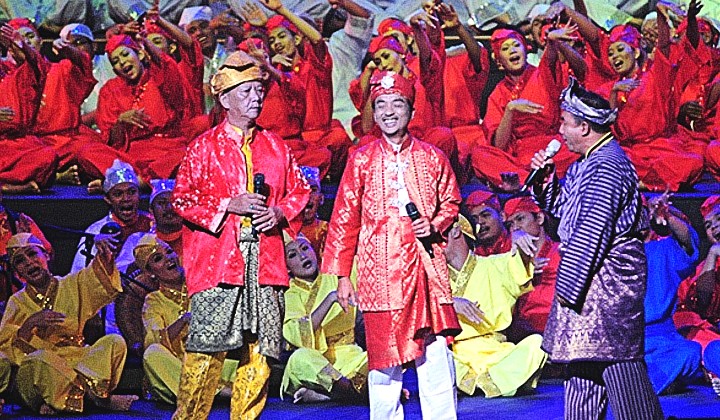 Malaysiaâ€™s cultural heritage and artistic identity are as rich and vibrant as the people that call this majestic land home.

TRP takes a shallow dive into the history of Dikir Barat and how the musical genre has managed to echo its way into the modern age.

Dikir Barat is a unique musical art form which involves the combination of singing, carolling, poetry reciting, synchronised dancing, and of course, music.

A typical Dikir Barat performance is usually made up of several key elements; the â€œTok Juaraâ€ and â€œTukang Karutâ€ act as the leaders of the performance. They are put in charge of taking the lead in the performance by singing and reciting â€œpantunsâ€ or “syairs” – Malay poetry style performed in a quatrain, or a poem consisting of four lines – at times, in spontaneous “freestyle”.

The leaders are then followed by the rest of the group consisting of 10 to 30 individuals called the â€œAwak-awakâ€ made up of men, women or both, whoâ€™s job is to sing, chant and dance along to the lyrics and poems.

The whole performance is then accompanied by musicians playing percussion instruments like the â€œrebanaâ€ or the tambourine, and the â€œtetawakâ€ which is also known as a gong.

Though the origins of the art form remain rather obscure, Dikir Barat is generally accredited as a traditional Malay art form which has its roots in the nationâ€™s eastern coastal states, particularly Kelantan.

From Thailand, the Dikir Barat was said to have spread to Kelantan and other parts of Malaysia and soon evolved into the form that it is today.

Experts also note the contribution of a Kelantanese man known as Pak Leh Tapang, who was said to have revised the original Dikir Karut format and introduced pantuns into the mix.

Some historians also mentioned how Dikir Barat was influenced by aspects of the Indian-Punjabi style of â€œqawwaliâ€ music.

Dikir Barat remains one of the nationâ€™s most unique artistic expression as the songs and poems within the performances cover a range of subjects, from religion to politics, to every day topics that provide a glimpse into the lives of everyday Malaysians.

The nature of Dikir Barat performances, which can involve fierce competition between two or more opposing groups who try to outwit each other with their lyrical prowess, also makes the art an enjoyable and stimulating form of entertainment.

Itâ€™s like a regular olâ€™ rap battle! Check this out.

Simply put, it is a creative and intellectual form of oral tradition that has been passed down through the ages.

Lasting through the ages

Those who hail from the east coast, especially Kelantan, should already be aware of how huge the Dikir Barat scene can be and how it is also quite popular among the youths.

The acclaim that Dikir Barat has in the â€œLand of Lightningâ€ is said to have been brought on by restrictions set by the Kelantan government during the 90â€™s that banned everything it deemed â€œun-Islamicâ€.

Dikir Barat managed to survive the censorship as it was seen as a convenient way of disseminating information to the public.

Nowadays, Dikir Barat is used not only as a form of entertainment but as a means to spread knowledge, news, literature, and to an extent, even propaganda.

The musical art form, as with many things, has also gone through many stages of evolution over the years.

In Kelantan, Dikir Barat has produced its own line of stars and famous artists like the likes of Halim Yazid who reportedly sold over 20,000 copies of his album and to date has over 1 million views for his songs on YouTube.

As time goes on, Dikir Barat has been â€œremixedâ€ to include a range of popular karaoke songs, as well as modern Malay pop songs which take inspiration from the traditional folk art genre.

If you’re willing to go down the rabbit hole, a definite must-watch is the Dikir-Dangdut music coming out of the east coasts

The art form has also encouragingly received international commendation and, in a way, stands as a symbol of Malaysiaâ€™s national heritage.