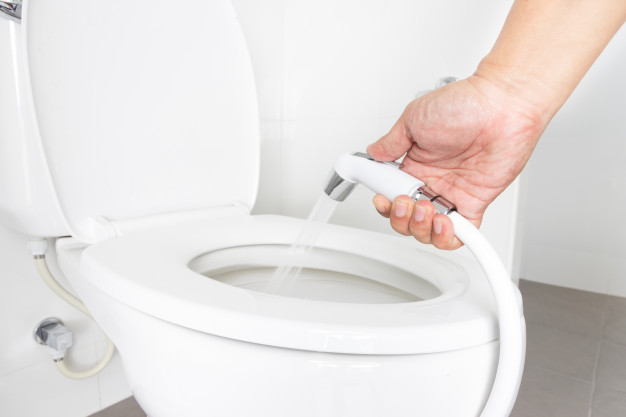 The one thing all Asians can relate to is the difficulty of using the toilet in Western countries.

Imagine, you’re sitting there. Freshly finished doing your business (whether it’s a number one or number two), you look left and right and realise, “Oh, no. I’ve made a terrible mistake.”

Asians have been happily cleaning their bums with water since we can remember, why hasn’t the West evolved to assimilate water into their toilet practices yet? Well, probably because they’re only realising the benefits of washing with water now.

Much to the surprise of Americans, Dr Evan Goldstein, a rectal surgeon in New York City, told Insider during ButtCon (basically Comic-Con, but with butts) that washing with water is actually the ideal way to clean yourself after using the bathroom for a number of reasons.

Asians know that using only tissue to wipe basically means you’re just smearing that faecal matter around (gross!), without actually cleaning the area.

Meanwhile, washing with water (and soap, guys! Especially when it’s a number two!) thoroughly cleans the area of any trace of feces. Finishing that off with a wipe of tissue paper to dry, leaves our backsides feeling cleaner and fresher after every poop!

Using only tissue can lead to injuries

Besides being a better cleaning agent all-around, Dr Evan also states that only wiping your bum using tissue can actually lead to injuries.

He explained to Insider that the skin on the anus is quite thin and delicate. On top of that, dry toilet paper can be abrasive. This is why wiping too many times, or any harsh action could lead to painful tears (and tears!) and bleeding.

Some Americans agree that using a bidet to wash your nether region can be more comfortable than toilet paper, especially for people who just had surgery, given birth, or experience irritable bowel syndrome.

Turns out, this topic is really contentious – to the extent that researchers have been conducting studies to figure out the pros and cons of washing with water.

Respondents of a 2009 study on patients who had undergone a hemorrhoidectomy commented that using a water spray was significantly more convenient and satisfying.

Another study in 2011 found that water pressure from bidets helps reduce the pain from increased pressure at the anus due to anorectal diseases, and thus, also aid the process of pooping. Yes, that trick you learnt on your own in the bathroom during a particularly difficult poop, researchers tested it on people!

Not all research on bidets is positive though. A large study of women in Japan in 2010 found that frequent use of bidets could interrupt the normal bacterial flora in the vagina and lead to infection.

Using only toilet paper to clean yourself also means using a lot of toilet paper. The average American reportedly uses 3 rolls of tissue a week! While the whole country goes through about 36.5 billion rolls a year!

Do you know how much water goes into making one roll of tissue paper? About 140 litres. Making tissue also involves the pulping of millions of trees, and using tonnes of chlorine.

And that’s not all. We haven’t even considered the amount of electricity that goes into all that processing, as well as the amounts of energy and materials used in packaging and transporting the rolls of paper to retail outlets.

Besides that obvious environmental impact, tissue paper is also known to clog plumbing and force the city’s sewer systems and water treatment plants to work much harder.

Why does the West still use toilet paper?

This is actually an interesting bit of history. As you all know, America was founded by Europeans who traveled across the sea in search of a “New World”. The country adopted many customs from the British, including the use of tissue paper.

In ye’ old Britain, the people often associated bidets with brothels, where they were mostly used, and thus, considered bidets to be “dirty”.

Realising the drawbacks of tissue paper, Americans are now being encouraged to use soft wet toilet paper, or wet wipes, to clean themselves. But, I know I can speak for all Malaysians when I say: “Thanks, but we’ll stick with water.”

The US Has Highest Covid-19 Deaths, Records Over 20,000 Casualties